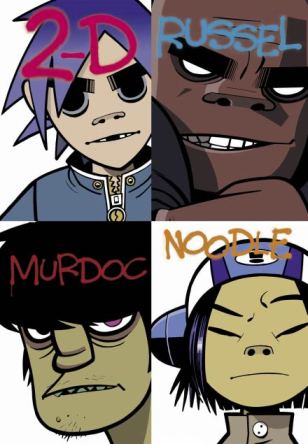 Our favorite cartoon band returns to fight on

Votes due by Tuesday, July 26th at 8 PM EST! We took a break for a day- sorry for the stoppage but given our strugglefest turnout the last few days, maybe not so terrible to push voting to the weekdays? Anyways, three divisions left before we launch into the Round of 64! Let’s keep up the momentum and finish with a bang. Songs are all over the place, couple classics, a world selection, some modern stuff. Listen hard and vote with your hearts. No google form today, I don’t have time to teach myself how to set it up and I sorta like entering the scores manually anyways. Use the Grooveshark link or the playlist. Best of luck to all songs!

In the left corner, Phil Collins returns as a 1 seed and stands to defend his song that is not about drowning. He goes up against alt bluegrass survivor Crooked Still. We’ll follow that up with some more music that you could find at SXSW- Josh Ritter and My Morning Jacket tee off in the middle spots. We’ll see if Ritter can follow in Semisonic’s footsteps and be another play-in round survivor advancing to the 6-4. The Gorillaz attempt to Clint Eastwood their way past Malian afropop star Salif Keita.To close the round, a battle of old vs new as Springsteen dusts off the mike stand and lines up against SK6ERS.
Pastable below. Kisses, team.

In The Air Tonight by Phil Collins vs. You’ve Got The Silver by Crooked Still

Snow Is Gone by Josh Ritter vs. One Big Holiday by My Morning Jacket

Clint Eastwood by The Gorillaz vs. Yamore by Salif Keita & Cesaria Evora

Hungry Heart by Bruce Springsteen vs. You Win by Stephen Kellogg and the Sixers

The day I was born, Michael Jackson's Thriller album was at the top of the Billboard 200. I've been trying my best to live up to that expectation ever since.
View all posts by g-mo →
This entry was posted in Music, Music Tournament and tagged Living the Dream, Music Tournament, Peoples' Choice Tournament, Round of 128. Bookmark the permalink.