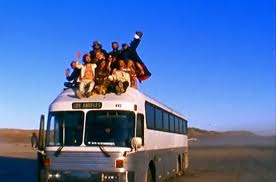 while our 7 seed began as a 2 seed but only averaged 5.9 from 31 voters.  If Tall Trees hadn’t been facing Metro Station in the Round of 256, we might have a very different set of songs tonight.  So far, though, the new seeding system seems to be working out nicely.  We’ll see how it works out tonight.  Here are the songs.  Votes are due by 8 pm EST on Friday, July 15.  And now a bit about the match-ups.

A favorite with voters in the Round of 256, “Home” was also was voted number 15 on the Australian Triple J Hottest 100, 2009 countdown, the largest music poll in the world, according to Wikipedia.  It faces “Songbird,” which is from the Rumours album, which is Fleetwood Mac’s most successful release with sales of over 40 million copies worldwide.

“A Boy Named Sue” was released in 1969, and although it was penned by popular children’s author Shel Silverstein, it was promptly censored, due to the “Son of a Bitch” line. 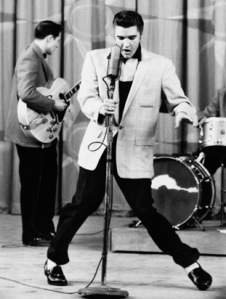 #5 All Shook Up (Elvis Presley)

In 1957, “All Shook Up” knocked off a Perry Como song for the top spot on the Billboard Top 100 Chart.  Can Elvis shake things up enough to knock Johnny Cash’s song out of the next round of the PCT?
#4 A Boy Named Sue (Johnny Cash) v. #5 All Shook Up (Elvis Presley)
“Fisherman’s Blues” was a big hit on Billboard’s Modern Rock chart in 1989.  “Tall Trees” is by a folk orchestra from Chapel Hill, which has grown from being one guy’s bedroom recording project to being a full symphonic band that sometimes has a dozen members.
#2 Fisherman’s Blues (The Waterboys) v. #7 Tall Trees (Lost in the Trees)
“Let Me Go” is from Cake’s 1998 album, Prolonging the Magic.  “Incident on 57th Street” is from Bruce Springsteen’s second album, the 1973 The Wild, The Innocent, and The E Street Shuffle, which is an awesome album title.
#3 Let Me Go (Cake) v. #6 Incident on 57th Street (Bruce Springsteen)