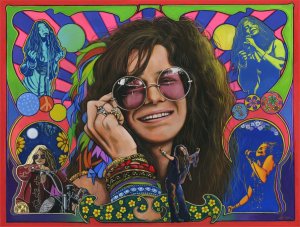 Welcome to Ladies Night.  This tournament has more gender diversity than past ones, but it’s still not close to parity.  That said, I’d venture that nearly half of the favorites to actually win the tournament are female vocalists, and a few of them are leading the Day 4 brigade.  Listen at the bottom of the playlist here except America and vote by commenting below before 11:59pm  on Sunday night.  See you later, I’m out to protest the NYPD.

#1 Me and Bobby McGee (Janis Joplin) vs. Don’t You Want Me (Bahamas).  While everyone associates this song with Janis, it’s actually a Kris Kristofferson cover.

#2 Tide is High (Blondie) vs. #15  I Found a Reason (Cat Power).  Blondie’s catchy tune is pretty damn ambitious when you hear the Paragons reggae classic.  (From an album called “On the Beach”!)   Cat Power got love last round, let’s see if she can keep up the momentum.

#3 Respect (Aretha Franklin) vs. #14 My Ride’s Here (Bruce Springsteen).  This isn’t said often, but the Boss is a serious underdog here as he faces off against the Queen, who is covering an Otis Redding original.  For those who missed the prelims, Bruce is covering Warren Zevon, who wrote this song as a farewell to earth.

#7 Love Never Felt So Good (Justin Timberlake) vs. #10  America (Sting).  Like R. Kelly, Sting is hamstrung by my need to find a live Youtube clip of this S&G number Sting played during his fantastic recent tour with Paul Simon. Song starts a minute in, but the story is a nice one. Meanwhile, Love Never Felt So Good was Michael Jackson’s posthumous single, and probably his best work since the mid-90s.  I found Timberlake’s remix intriguing, and wonder what you think.

#4 Blinded By the Light (Manfred Mann) vs. #13 100,000 Fireflies (Superchunk).  Mann’s reinvention of an early Springsteen song turned into a big hit. Superchunk’s cover of the Magnetic Fields did not.  Discuss.

Congrats to Me and Bobby McGee (Janis), Tide is High (Blondie), Respect (Aretha), America (Sting) and Blinded By the Light (Manfred Mann) for advancing to the Round of 32.