4 Ways To Drive From Baltimore to San Francisco

I just finished up taking an hour to describe a number of different road trip routes to go East to West, specifically from Baltimore to San Francisco- a UMD graduate I worked with is making the leap to work with a small socially-conscious company out that way and asked me for advice. However, I figure since I took the time to type it all out that I’d just publicize accordingly and plug in some representative pictures from road trips over the years. As a qualifier, for the alternate routes I suggest I kept in mind not adding more than 5 hours to the fastest possible route (which is I-80 from Cleveland to the San Francisco Bay.) Hopefully someone else can use this loose itinerary for a future road trip!

So driving across the county. Here are my four route suggestions with some pros and cons:

Snapped this one on a short weekend jaunt to Indiana in 2011. This sums up my thoughts on the “Interesting” score for doing it this way.

I guess when you Google Map it the fastest way to do it is I-80 West the whole way basically from around Cleveland all the way to San Fran. This is a pretty decent NatGeo overview of what you’d see if you did that. It’s good country in the middle, kinda boring though. Either way on I-80 you get Reno/Lake Tahoe, although if you’re in San Fran I’m sure you’ll see that again. An option that would add an hour or two so total for your driving time would be driving down to Rocky Mountain National Park in Colorado.

Doing I-90 from Chicago on through the Wisconsin/Minnesota wilderness, through South Dakota and Wyoming length-wise but cutting back down to I-80 via state roads around Yellowstone in Western Wyoming. In South Dakota you’d get to see the sunflowers (they are everywhere in the Summer,) you’d get to drive through Wall, you’d get to see Badlands National Park, and you could stop and see Mt. Rushmore (which is admittedly underwhelming, the Black Hills region of west SD is beautiful though, and Rapid City is a cool town) then you could catch a real rodeo in Cody, Wyoming if you time it right before you got to Yellowstone. After Yellowstone you can cut down through Southwestern Idaho and hit up I-80 in Nevada before going the rest of the way. The temperatures should be better for having your windows down this way too.

Eyeballing what to hit up going South of I-80, a couple things pop up to me. If you take I-81 south, its a short detour off the road to get into the Great Smoky Mountains if you’ve never done that. I-40 through Tennessee is pretty good, Nashville is obviously a stop for anyone with a remote interest in Country (it’s actually super fun.) From Nashville you could sorta meander back up through St. Louis and Kansas City, good food in both places. This’ll take you on a straight shot to Denver, which is a city near and dear to my heart and 30 minutes from the People’s Republic of Boulder. After that you’d take I-70 through the Rocky Mountains past Aspen/Breckenridge/etc., and you’d hit 12,000 feet going through the Eisenhower Tunnel (which is a crazy, crazy thing.) Next stop would be Moab, Utah and Arches National Park as well as Canyonlands (both are within 30 miles of there and Moab is about 20 miles south of I-70.) From Moab go back to I-70, take it until:

Option A, South of South (total time 47 hours) …it ends at Cove Fort and then you can brag to all of your friends how you’ve seen both ends of I-70 from Baltimore to Utah. Take I-15 South from there, stop and see Zion National Park, which is awesome, then continue on through Vegas, into the Mojave Desert. Stop in Baker and see the giant thermometer. Continue on past Barstow toward Bakersfield until you get to I-5, and then ride the big Interstate home to San Fran. If you wanted to be really crazy about it you could continue West until you got to the 101, but between San Fran and LA it’s not as cool as it is north of San Fran.

Warning, if you do this, it is going to be really, really hot in the Mojave. But you get to see Zion this way. Tradeoffs… 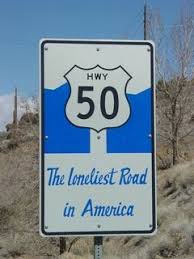 Option B, The Loneliest Highway in America (total time, 46 hours): …you hit Route 50 in Salinas- take Route 50 West and stay on it for a long long time. When Route 50 hits Nevada it turns into “The Loneliest Highway In America,” a bunch of old abandoned mining towns all 100 miles apart or so. Warning: If you go this way, you have to watch your gas tank like a hawk. This way goes through Great Basin National Park, and a bunch of very awe-inspiring nothing. I did that drive solo when I was 23, one of my faves. Anyway, continue on Route 50 until Reno, then hop back on I-80 the rest of the way (again, there’s a Tahoe option.) If you’re a musical history fan at all, Virginia City (which is along Route 50) was an important place in the development of the San Fran psychadelic scene in the mid-60’s.

In conclusion, many roads lead to San Francisco. My dog even made it twice. Hope this was helpful to whomever!

The day I was born, Michael Jackson's Thriller album was at the top of the Billboard 200. I've been trying my best to live up to that expectation ever since.
View all posts by g-mo →
This entry was posted in Adventures, Great American Road Trip and tagged Baker, CA, Cody, DC to San Fran, I-70, I-80, I-90, Loneliest Highway In America, Moab, Nashville, Nebraska, road trips, Rushmore, South Dakota, Zion. Bookmark the permalink.