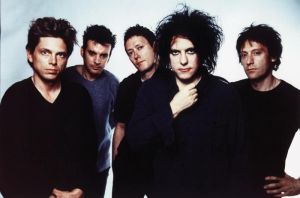 The Cure…not holding up as well as their songs.

(Because Hurricane Sandy has wreaked havoc on the coast, and knocked out many peoples’ power, including mine, voting will be extended until 11:59pm (EST) on Sunday.  Hopefully that will be enough time to get votes in.)

What better way to kick back during the biggest Atlantic storm of our lifetimes than rock out to four excellent tunes?  First, let’s recap what happened in the Elite 8.

Man on Fire (Edward Sharpe & The Magnetic Zeroes) def. Get Rhythm (Johnny Cash), 89.7-69.3.  The bottom fell out for Cash, as he gets blown out by the Zeroes, who post the highest average of the semi-finals.

Australia (The Shins) def. Sir Duke (Stevie Wonder), 77.9-71.2.  The Shins are solid, but post the lowest score out of the Final Four in knocking out Stevie Wonder.

For the Final Four picks, listen here and vote by commenting below by Midnight (EST) on Wednesday evening.   The Finals will commence Thursday morning, and run through Saturday.

Killer Queen (Queen) vs.  Man on Fire (Edward Sharpe and the Magnetic Zeroes)