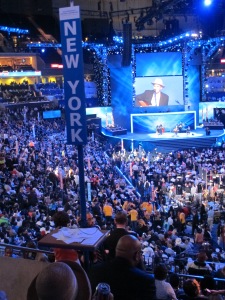 A view from the New York delegation’s seats, where I enjoyed the soothing sounds of James Taylor.

Charlotte may have been a circus, a hot stew of politics, punditry and freeze booze, but some productive work did get done.  I broke two stories from the Convention for City & State, both about New York political stars looking to expand their national brands.  The first was about an afternoon event I attended featuring New York City Council Speaker Christine Quinn, who looks to build a national profile as she runs for Mayor.  The second is about Senator Kirsten Gillibrand’s splashy visit to the Iowa delegation, and important constituency to impress, depending on your ambitions.

I also made a cameo in Esquire, part of a night that was not nearly as bad as advertised.

Janos Marton is a lawyer, advocate and writer.
View all posts by Janos Marton →
This entry was posted in Uncategorized and tagged Christine Quinn, City & State, Kirsten Gillibrand. Bookmark the permalink.