Fall-Out in Vancouver, by Nate Senge 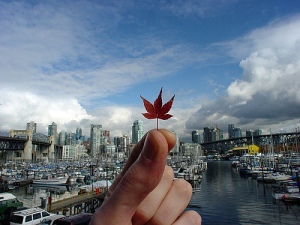 You’re a thousand miles from home and you’re out of gas and the sun is not shining but a slight rain is settling down on your shoulders and tinging through your clothes and all you can think about is that goddamn good melody that Lady Gaga just put down on a song the producer wrote the chorus for and then it went to shit and you can’t believe they gave the Superbowl Halftime to Madonna as if she didn’t have enough chances and she is fifty-five and propped up on plastic and there’s still Lady Gaga out there making her next music video in the third smallest pool of a Hollywood estate where the last time rain fell was 1933 when Jack Nicholson was fighting crime and fighting blondes.

“Gastown. You’ve gotta go to Gastown,” Charles was saying. I snapped to.
“Gastown is a yuppie’s swamp,” his wife said.
“Only corners of it. Go to Gastown. You’ll see what I mean. Just go.”

We had been in Charles’s house ten minutes. We had just spanned the thousand miles between Wyoming and Seattle in an overnight binge of Red Bull and McDonald’s and had now tracked the northern route to the great bay that barriers against the Coastal Mountain glaciers that track up the Alaskan Panhandle into Anchorage.

I don’t know what we’re doing here. It is beautiful and the people are friendly and have an adorable lilt to them that reminds me of Smurf characters. They all offer lodging and sometimes coffee and a terrible Canadian beer.

When you see the splay of highrises that line the northern shore of the Vancouver peninsula it looks like Manhattan. Except they are all blue glass, LEED-certified, all that good stuff do-gooders piss about. And marking off at a million dollars a roof.
We took the Seabus with the billion other Australians with snowboards under their arms and drawling mate and throwing up highfives. We sat down next to one kid who told us to watch out for the tramps who would throw scratch tickets at us. We asked why they did this and he had no answer for it. It just happens so keep your distance.

We landed and got lost in the yuppie lane about which we were forewarned and navigated it like a play-boating kayaker glides through the eddies of a class-five rapid. We got spit out on a street that was dead quiet and you could see the shadows move as the tramps marshalled and came out to get us. We slid into the first pub we saw and by the dark lighting and the sweat smell of barfights we knew it was an Irish bar.

This first Irish pub was a silent nest of fetid creatures. We sat uncomfortable and still and ordered a Guiness and it never came and we left. We turned a corner onto a broken street with a hotel where they charged by the hour and the month.
We turned another corner back to the seafront-desperation lurking all around-and the second was passable and we sat down to have a pint. I continued my hopeless testing of Canadian micro brews where I was offered a “Kokanee eh.” – Cute blonde girl saunters up and lays her breasts on the counter and asks me what I want. I say I don’t want a Kokanee. Perhaps you’d like to try the local pale. Perhaps I would.

She shuffles off and does an immaculate pour. She tips the glass back as the bubbles rise and lets them simmer and then tips it back in and lets the beer collect along the up-rim of the glass and then gives a little blow shuffle off the top.
“Start a tab?” “Of course.”
She grips the sides of her shirt and tries to wrench them over her hips but they just ride back up and no amount of effort is going to keep the peanut bar from loose-jawing. It is too bad but she did wear the shirt.

“Why’d you wear that shirt?” I ask when she comes back, not giving a damn. “What do you mean, sweetie?” “That shirt. It’s hot. But it rides up. And it turns heads. And it annoys you. But you like it. And all the same, it complexifies.” “Complexifies?” “Yes. Complexifies. You could have it easy. Or is this making it easier for you?” “Where you from, darling?” “Right now or cosmically?” “Cosmically.” “New England. Piece of stardust that crystallized over the blue mountains.” “My stardust fell on Gastown.” “You like it here?” “It’s fun. It’s better than it was. Now that they’ve pushed the tramps and crackies out.” “Gonna be here all night?” “Of course.” “So am I.”

The pints start tipping and the room gives off a little wurble and the music cracks into gear. It’s a bunch of fifty year-olds and they’re dipping back and forth and shuffling around and the wasted twenty year-old girls are flipping over it.
“Stay here or shoot luck down the road?” I ask Clay–I want it official. “Stay here.” “Absolutely.” “Absinthe?” “Right now.”
The apparatus comes out and the green liquid is dribbled out over sugar cubes and I think of Hemingway and the garden of Eden.

“What do you think of Canada?” I ask her as she dribbles the ecto-goo. “It’s Canada. What do you mean?” “Liberal. Conservative. Bored. Thrilled,” I measure off. “Everything in a jumble. With an eh topped over.” “Dance with me later.” “I’ll dance with you now.” “Job. No job?” I weigh the air. “No job,” and she throws her legs over the bar and slides over into my lap and I carry her off into the thicket and we toss and twirl and bend and slip and splatter and phwap!-we’re back at it again.

They break into Losing My Religion and the place goes cold and sober but the ceiling still thumps and the feet stomp and I don’t know what the hell is and isn’t.

We spit out into the thrashing rain that is falling sideways and in off the bay and make it to another club that is full of trash dub-step and ecstasied girls falling over each other and I blink and blink again and I am getting out of a car somewhere on the far side of town after the buses have stopped running. I look around and it is vacant and silent. An old-timer crops up out of the darkness and asks for change and I give him a two-sie. I curl onto the bench of a bus-stop and pass out and figure as I am passing out that the engine of a bus will wake me up.

It doesn’t. I wake up at ten the next morning and connect via the SkyTrain back to the SeaBus and think how much fun all these Disney names are and how much fun I had at Disneyland before I realized that there were real men in those Pluto and Chipmunk suits.

The clouds ring off the peninsula and put it in a big long grey sock. The white mountain tips glide over their tops and look down on the ocean. We were supposed to be going up there today. To camp in the Joffrey Lakes backcountry and climb a thousand meters to swish through the powder snow that had been falling out of the sky steady as a salt-shaker for the past seven weeks.

I buy a sandwich I can’t finish and a bag of chips I can’t open as my eyes begin to close and now I do have to go camp and it’s the last place I want to go right now but maybe that will change in the two hours of sleep I’m about to take in the passenger seat of the car.

Janos Marton is a lawyer, advocate and writer.
View all posts by Janos Marton →
This entry was posted in Fiction and tagged Nate Senge, Vancouver. Bookmark the permalink.