It Takes a Movement: Remembering Those Who Pressured Dr. King 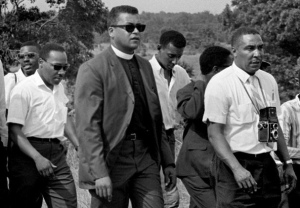 Though the Dr. Martin Luther King Jr.’s exalted position is deservedly celebrated, each year brings a more whitewashed remembrance of his radicalism.   Few mainstream tributes discuss his opposition to the Vietnam War, a position that the New York Times then called “wasteful and self-defeating”, and to which the Washington Post remarked that he had “diminished his usefulness to his cause, to his country and to his people.”   Likewise, little discussed is his core belief that without economic rights, civil rights meant little, and that a multi-racial alliance of the poor needed to be organized to fight for those rights.  Though these aspects of Dr. King’s life will be underrepresented by news network video montages this weekend, they are old hat for the progressive community.

To this crowd, a similarly important reminder is needed:  Dr. King was an imperfect leader of the civil rights movement, and many activists at the time questioned his role as national spokesman for the movement.  Especially with Occupy Wall Street creating the umbrella for a lasting activist coalition not seen in decades, remembering that Dr. King was not the only force driving the civil rights movement is crucial both for the movement’s strategy and its morale, which can take a beating when compared to the idealized remembrance of the civil rights era. While the 1957 Montgomery Bus Boycott made the twenty-six year old Dr. King a figure of national prominence in the civil rights movement, the subsequent years were noticeably devoid of significant, organized civil rights agitation.  The next action to shake the nation were the Greensboro sit-ins of 1960, when four young African-American men took their seat at a whites only counter and refused to leave.

The sit-ins reverberated across the South for a bolder generation of African-American youths who had come of age in the aftermath of Brown vs. Board of Education, and uncoordinated sit-in actions spread like wildfire.  Thousands were arrested in actions that spread from diner counters to public parks, public beaches and pools (“wade-ins”).   Not only was Dr. King not involved in the planning of these dramatic actions, but he was slow to endorse them.   Much of the sit-in related organizing was being led by the very young Student Nonviolent Coordinating Committee (SNCC). SNCC activists were in many ways similar to Occupy Wall Street protesters- proudly non-hierarchical, distrustful of the establishment (to which the felt the NAACP and Dr. King belonged) and without concrete demands, hopeful as they were for a truly transformative society.    SNCC had been founded at a retreat hosted by legendary organizer Ella Baker, who distrusted centralized and charismatic leadership, for fear of its antidemocratic tendencies.

In concert with the Congress for Racial Equality (CORE), SNCC organized the freedom rides of 1961, in which white activists would join their African-American brothers and sisters in desegregating bus lines through the South.  This was incredibly daring activism.   Buses were torched routinely, with riders savagely beaten and even killed by racist mobs, aided and abetted by local law enforcement.   These headline-inducing acts of violence were causing President John F. Kennedy, a cautious but steady supporter of the civil rights movement, serious headaches as he prepared for his summit with Soviet Premier Nikita Khrushchev.   Kennedy asked Dr. King if the freedom rides would heed a “cooling period” around his summit with Khrushchev, so as not to embarrass the United States.  This was not a request Dr. King was in a position to fulfill, but many white political leaders did look to him as the operational head of the civil rights movement.  Dr. King dutifully relayed President Kennedy’s request to SNCC and CORE, who emphatically rejected it.

Tensions between SNCC and Dr. King were further exacerbated by the 1962 Albany Movement, a moment seen as a major setback to the civil rights organizing by all participants.   SNCC organizers had been, without much success, attempting to organize local African-Americans in Albany, Georgia to register to vote.   Dr. King’s arrival in Albany only complicated matters, as local authorities clamped down harder.  Dr. King stayed for only few days, making several impassioned speeches, before moving on.  When he did, he took the media with him, depriving on the ground activists of the little oxygen they had.   This effect is by no means unique to Dr. King; whenever a politician or celebrity loudly endorses a cause, the short-term attention they bring to it must be weighed against the media narrative ending when they move on.

This is by no means a hit piece on the efficacy of Dr. King to the civil rights movement.  The “I Have a Dream” speech is one of the most important and beautiful moments in American history.   His liaising to the white political establishment, whatever resentment it inspired among the activist rank and file, was essential to the passage of critical legislation like the Civil Rights Act and Voting Rights Act.  His aforementioned opposition to the Vietnam War, radical at the time even to his supporters, inspired many religious leaders to speak out against militarism.   His tragic assassination at the age of 39 wows us to imagine how much more he could have achieved. His greatest legacy, however, was to inspire all of us to re-imagine society as more just, and to achieve that society through love and nonviolence.   He would not have wanted history to remember him as a singular leader on whom the civil rights community depended.  He knew the power of grassroots organizing, local leadership, and the need to fight for justice on many fronts.   We are not waiting for the idealized version of Dr. Martin Luther King to reappear.   He is waiting for all of to be stronger leaders.

As historian Charles Payne has reflected, “Insisting that the movement was larger than Dr. King does him no dishonor.  Perhaps the most important point to remember about King is not that he ‘led’ the movement but that the movement gave him a platform from which he could appeal to the long-slumbering angels of our better nature, which he did as well as any leader of his time, probably better. That is honor enough.”