Covers Tournament: Round of 64, Day 3

Posted on October 27, 2011 by maureenmcollins 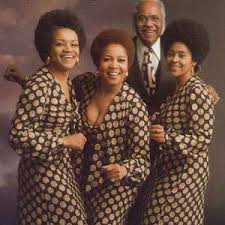 The Staple Singers go up against Metallica!

Welcome to Day 3 of the Round of 64! Grooveshark link with tonight’s songs is here, except for Proud Mary. Vote in comment section below, with scores from 1-10 for each song before Sunday, Oct. 30 by 8pm EST.   I am giving you guys an extra day to vote, since I know that I won’t be able to put up results on Saturday night.  I will be at a Halloween Bar Crawl, dressed up like a hamster.  Totally normal.

We have some good stories from most of our nominators in this set of songs.  I am loving hearing about why people like these songs, and what they think sets them above the rest of the crowd. Without further ado…the match-ups!

In the Morning (David Gray): “David Gray is an artist who prides himself on his original songwriting and styling of music.  So when he makes a cover of a song, you know it’s bound to be great.  This track is off of an album that David Gray did entirely made of cover songs a few years back.  The album was never released in the US, but I picked up a copy across the pond in 2008 and fell in love with most of the tracks immediately.” – NatalieG

vs. Man Who Sold the World (Nirvana): No blurb for this cover of a David Bowie original. But well, it is Nirvana, so most of us know a little something. Wikipedia says that Kurt Cobain  listed the David Bowie album that this song was originally on in his top 50 favorite albums.  This version is most well-known for being part of Nirvana’s MTV Unplugged in New York.

Turn the Page (Metallica): “I always thought music with a little bit of crunch to it has been sadly absent from these tournaments (or blown to smithereens in the first round).  Metallica’s Garage Inc is two discs of covers that kick up the crunch.  Although not my favorite track (i.e., songs titled Die, Die, My Darling and Merciful Fate are automatic 1’s for many), Turn the Page is a great take on a great song that doesn’t go too overboard with the distortion.  Side note: I find it amusing that when touring for this album, since they were performing all covers, Metallica had a Metallica cover band open each night.” – Danno

vs. The Weight (The Staples Singers): “First, let me say that I don’t think of this version of the Weight as an improvement on the Band’s original studio recording. In a lot of ways, it’s a very different song- more hopeful and uplifting, less weary. According to Robbie Robertson, the Band was influenced by the Staples’ interpretation, incorporating some of their harmonies and phrasing in later live performances, most famous of which is obviously their collaboration in the Last Waltz, but also before that in their performance at Woodstock. In this recording, I like Cleotha Staples’ smokey, tempered delivery (Mavis, the lead vocalist in the Last Waltz version, only does backup here) and Pop Staples’ rich harmonies in the chorus. I can take or leave the strings, but with just about everything the Staples touch, it’s all about the vocals.” – Jacob 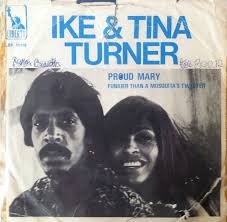 True story: My grandma was Tina Turner for Halloween two years ago. She was awesome.

Proud Mary (Ike and Tina Turner):
“Ike and Tina Tuner’s version of Proud Mary blows CCR’s version out of the water, and that is saying something.  Tina is at her most unhinged – just goes for it and everyone who hears it loves it.” – Ian
vs. Atlantic City (Rodney Parker and the 50 Peso Reward): No blurb for this cover of a Bruce Springsteen original.   Googling Rodney gave me three pieces of information: 1. This band has a terrible website. 2. They do not have a Wikipedia page. 3. There is a professor at University of Chicago named Rodney Parker who is doing some cool research.
Knockin’ on Heaven’s Door (Guns N Roses): No story provided for this one either.  GNR takes on Bob Dylan original.  More wiki facts: In 1987, GNR started including the song in their live sets. A live version of the track was initially released on the Maxi-Single of “Welcome to the Jungle.” They recorded a studio version in 1990 for Days of Thunder’s soundtrack. 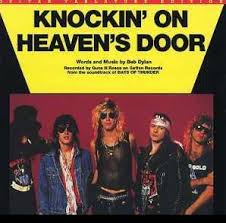 vs.  Walk This Way (Run DMC): “There are many songs people consider ground breaking which are, in reality, just popular songs; Run-DMC’s version of “Walk This Way,” however, certainly falls into the former category. “Walk This Way”
catapulted hip hop into the mainstream and started the genre that
would become rap rock. I know Tyler and Perry appear on this track,
but it’s clearly not the original version. DMC, Rev. Run, and
Jam-Master Jay slay this ditty and we all know it. “And it started
with a little kiss, like this…” – Colin

In the Morning (David Gray) vs. Man Who Sold the World (Nirvana)

Turn the Page (Metallica) vs. The Weight (The Staples Singers)

This entry was posted in Music, Music Tournament and tagged Covers Tournament, Living the Dream. Bookmark the permalink.