Round of 64: Division G/H Semi-Final Results 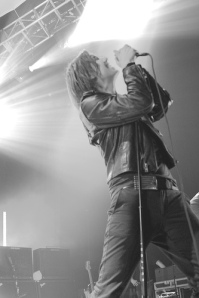 Folks, this will have to be a  short post, because I’m under the gun at work until I leave to watch Planet of the Apes. Opening night, what!?  Seriously, I’ve always loved this concept, both the original movie and the books were always a good mix of action and introspection.

On to our results. The listening party, filled with irregular voters, had a seismic impact on a couple of matches.

#1 Ain’t No Mountain High Enough (Marvin Gaye and Tammi Terrell) def. #4 What Is And Should Never Be (Led Zeppelin),  172.1-152.45.   Marvin and Tammi make the Wall of 10s, courtesy of NatalieG and Zd.   Music tournaments have not been kind to Led Zeppelin, who would probably do better in an Album Battle (Led Zeppelin IV, anyone?).

#2 Bad Reputation (Joan Jett) def. #6 Closing Time (Semisonic), 162.6-151.55. Once again, Semisonic defied haters and looked poised for another upset.  Bad Reputation had some strong supporters, though, and it eked out a win.

Every song averaged above a 6! Happy Friday, enjoy the weekend, and check back in for a new set of match-ups on Sunday.

1 Response to Round of 64: Division G/H Semi-Final Results