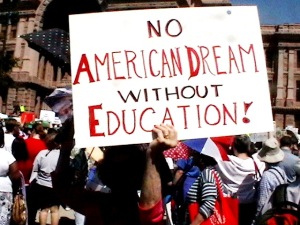 The new debt ceiling bill is unpalatable to many, but a provision that snuck in without much fanfare is killer to graduate students all over the country.

Beginning in July of 2012, Stafford loans will begin accruing interest while students are still in schools, ending a long-time federal subsidy.   The government is expected to save a whopping $8 billion over five years by enacting this new policy.

Here are some reasons why that is a foolish and obscene idea:•    In this economic recession, graduate students are already struggling to find quality jobs.
•    To balance the budget on their backs instead of repealing the Bush tax cuts or closing corporate loopholes is unconscionable.
•    Financial aid for higher education has built the middle class in this country since World War II. This is an enormous step backwards.
•    An assault on grad students is an assault on all students.  Stafford subsidies for college students could be next, and Pell Grants are on the chopping block every year as it is.
•    The United States cannot be competitive internationally in the 21st century if we deter our brightest from entering graduate school programs and saddle them with ever-increasing debt when they arrive.

Fortunately, we have a year to organize.  This Facebook group will serve as an early operating base while we contact elected officials and media outlets.

If you, or any of your friends and family have ever been the beneficiary of a Stafford loan, then join the cause.

Janos Marton is a lawyer, advocate and writer.
View all posts by Janos Marton →
This entry was posted in Political ramblings and tagged Debt Ceiling, Not Living the Dream, Save Our Students, Stafford Subsidies. Bookmark the permalink.