Round of 128: Division J Results

For those of you who weren’t around for the LTD tournament, there is a moment when this long, drawn out exercise starts quickly picking up steam.  As we sit here in the midst of the Round of 128, you may be surprised to know that the tournament is actually 64% over.

Anyway, sorry about the digression.  This was an awfully strong unit, and you guys showed some love for most of these songs.  Or maybe Brian Day just took a day off from voting (zing!).  Seriously, though, other than poor ole’ Gordon Lightfoot, all the song easily cleared the “6” benchmark.

#1 Midnight Train to Georgia (Gladys and the Pips) def. #8 Don Quixote (Gordon Lightfoot), 153-100.  Even though we actually have another version of “Son of a Preacherman” in this tournament, I’m proclaiming Midnight Train to be the Preacherman of the Peoples’ Choice Tournament.   The sultry female vocals over an easygoing rhythm and all.  Question, is there really a midnight train from L.A to Georgia? Seems unlikely.

#4 Get Off of My Cloud (Rolling Stones) def. #5 Can You Get to That (Parliament/Funkadelic), 139-129. In most of our tournament match-ups, an average of 7 would buy you a ticket to the next round, but Parliament ran up against a scorching Stones troupe that averaged 7.42 in advancing. Parliament remains alive with “Flashlight”, which an 8th seed underdog.

#2  You’ve Really Got a Hold On (Smokey Robinson & the Miracles) def. #7 Young Adult Friction (Pains of Being Pure at Heart), 140-126.  Smokey racked up some big numbers in winning, and will be the slight favorite against The Heavy.   The Beatles cover this song on one of their early albums.  It’s not great. 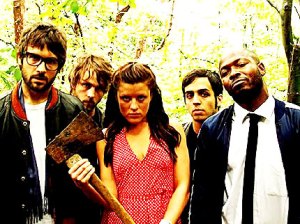 #3 How Do You Like Me Now (Live on Letterman)(The Heavy) def. #6 Home Sweet Home (Motley Crue), 127-119. There is a serious internet rumor out there that this live performance is the first time Letterman has asked for an encore.  Turns out that’s pretty untrue.  Last year he asked Wanda Jackson (w/ Jack White) for an encore, and a few years ago he asked the Foo Fighters for an encore- they are apparently his favorite band.  Still a pretty rockin’ tune.

Can I Get to That (Jacob and Catholic) and You’ve Really Got a Hold on Me (Maureen and Eileen) make the Wall of 10s.

Gordon Lightfoot, Motley Crue and the Pains etc. are out of the tournament.

Janos Marton is a lawyer, advocate and writer.
View all posts by Janos Marton →
This entry was posted in Music, Music Tournament and tagged Gordon Lightfoot, Motley Crue, Pains of Being Pure at Heart, Peoples' Choice Tournament. Bookmark the permalink.

6 Responses to Round of 128: Division J Results