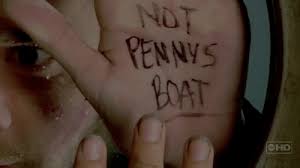 Votes due by Sunday, June 19th at 8 pm EST.  New voters, click here to understand what it is we do here.

The right side of Division F comes at us like an episode from season 5 of Lost.   That is, you never know which decade you are in.  The 60s, 70s, 80s, 90s, and 00s (which I’ve recently learned are called the “noughties”) are all represented in today’s matchups.  Fear not dear readers, Living the Dream is your constant.

Get Off of My Cloud

#2 Get Off My Cloud (Rolling Stones) vs. #15 Sweetness (Jimmy Eat World)  Jumping Jack Flash advanced to the next round, but the Stones reach for the skies one more time with their second and final entry in the People’s Choice Tournament.  Also, Jimmy Eat World makes their Living the Dream debut.

#7 Home Sweet Home (Motley Crue) vs. #10 Corduroy (Pearl Jam)  This may be kind of a slow jam from 80s metal band Motley Crue, but don’t be fooled.  Drummer Tommy Lee drums UPSIDE DOWN.  It doesn’t get any more metal than that.  They face off against 90s grunge rockers, Pearl Jam.  If you are upset at the loser of this matchup, perhaps it will console you to know that BOTH bands are touring the US in 2011.

#3 Alex Chilton (The Replacements) vs. #14 Kiss and Say Goodbye (The Manhattans)  This matchup starts with an homage to Alex Chilton, lead singer of The Box Tops and Big Star.  Chilton himself contributed to a separate track on this same album.  This matchup is a Thunderdome of sorts.  Both bands have only one song in the tournament, and only one can leave alive.

#6 The Low Spark of High-Heeled Boys (Traffic) vs. #11 Make You Feel That Way (Blackalicious)  This should be an interesting matchup.  On one hand, longer songs haven’t been rubbing many voters the right way so far in the PCT.  On the other, hip-hop songs rarely escape the mighty hammer of mama and papa Adrock…this one is anyone’s game folks.

A Boston-born nerd, currently enjoying his last summer of freedom in Chicago.
View all posts by Danno →
This entry was posted in Music Tournament and tagged Danno, Living the Dream, Music Tournament, Peoples' Choice Tournament, Round of 256. Bookmark the permalink.