Talk a Walk on the Wild Side 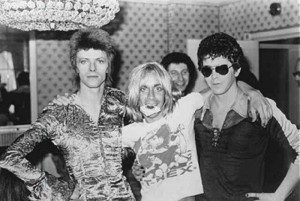 Lou Reed’s shocking loss last night in the Music Tournament caught me flat-footed and deprived me of a proper forum to tell this delightful tale of how “Walk on the Wild Side” came to be.  You see, while history has often touted the Velvet Underground as one of the most influential bands of all time, that influence was not readily apparent. Of the four Velvet Underground studio albums, only their first, Velvet Underground with Nico, even cracked the Billboard Top 200, and that with heavy publicity from the Warhol machine.When Reed left the band in 1970 (Oddly, what was left of the Velvet Underground kept touring for more than a year without him), he declared himself finished with music.

Meanwhile, David Bowie, a struggling young artist across the pond, had become one of the few actual British fans of the Velvet Underground.  On the wind of his single, “Space Oddity”, a pop hit written about the Apollo Moon landing to placate his restless executive, Bowie toured America for the first time, where he insisted on finding Lou Reed so he could produce his record.

Reed didn’t get the memo.  He had moved back into his parents’ house in Long Island and become an accountant.  He had sworn off rock and roll completely until one night when he came into the City for a party.  After a good night of jamming, he hinted that he might get back into the game- but who could possibly be interested in producing him?  With that, a friend whipped out a new copy of Rolling Stone, where a freakishly dressed Bowie was quoted saying that was in fact his number one goal in music.

Bowie brought Reed back to London, and the 1972 product, Transformer, is one of the best albums ever made.  In addition to it’s gorgeously simple tale of vagabonds, “Walk on the Wild Side”, it features the touching “Perfect Day”, “Satellite of Love” and the gritty “Vicious”.  Add lesser-known glue tracks like “Wagon Wheel”, “Hangin’ Round” (“you’re still doing things that I gave up years ago!”) and “I’m So Free”, and you’re talking glam-rock at its absolute finest.

After Lou Reed’s epic set at the Budapest Pepsi Island Festival in 2001, my older Hungarian buddy turned to me, grabbed my shoulders and said, “Janos, you must become the next Lou Reed.”  I wish, dude.  Take a walk on the wild side.

And yes, that dude in the middle of the picture is a young Iggy Pop.  His role in the story you just heard takes things to a whole new level.  Another time.

Janos Marton is a lawyer, advocate and writer.
View all posts by Janos Marton →
This entry was posted in Uncategorized. Bookmark the permalink.

2 Responses to Talk a Walk on the Wild Side