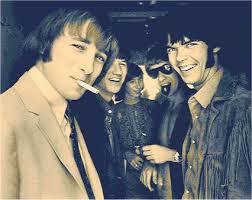 So if anyone caught a glimpse of my sweet explanation of standard deviation that was up for exactly 5 minutes, sorry for boring you. After a recount and a look in the Spam folder to pick up some more votes that for some reason went there, we have modified results. Can’t do too much narrative, gotta run to an interview in a hot sec.

Buffalo Springfield records the top score for the day and defeats The Only Living Boy In New York, 111.5-94.75. Those are the guys in that picture, by the way. I figure if you get to the Round of 128 people should have some idea of what you look like.

Out of the tournament: Spencer Davis Group.

The day I was born, Michael Jackson's Thriller album was at the top of the Billboard 200. I've been trying my best to live up to that expectation ever since.
View all posts by g-mo →
This entry was posted in Music Tournament and tagged Round of 256, Spencer Davis Group. Bookmark the permalink.