Still The Best Golf In Williamsburg 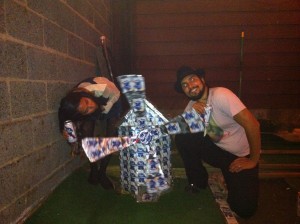 There are some stomping grounds in New York that are deservedly popular, even legendary, like Union Pool and the Silk Road Palace.  There’s no secret too them, and they’ll be packed every weekend.  At one time it seemed like the Bushwick Country Club would cross into this terrain, with its free six-hole mini-golf course.   In fact, I am a card carrying member of the club (Member #2209).

When we rolled through last night, the bar was pretty packed, but not a single person was hitting the links.  Better for us- they hooked us up with plastic putters and wiffle balls (the real stuff would be too dangerous for such a ragey setting) and we had the course to ourselves.   Seems that the Club has fallen on some hard times, because several of the holes were in a serious state of disrepair.  For example, on the second hole, home of the famous Pabst Windmill (pictured above), a straight shot through the windmill sends your ball flying onto the third hole. C’est la vie. Still the only place I know of in the city that you can nurse a $3 drink at while you line up your putt at two in the morning.

Janos Marton is a lawyer, advocate and writer.
View all posts by Janos Marton →
This entry was posted in No Sleep Till Brooklyn and tagged Bushwick Country Club. Bookmark the permalink.

3 Responses to Still The Best Golf In Williamsburg