The love for Ben E. King remains strong though looking perhaps less indomitable than in ’11. On to Division D!

We are on to our 3rd set of matchups. Some pretty epic songs here, so buckle up. Also the return of the King (Ben E.), who won nine straight matchups en route to victory in 2011. 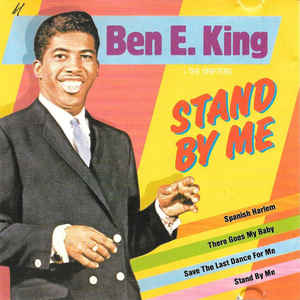 And without further ado:

“Paradise by the dashboard lights” (Meatloaf) vs. “When the levee breaks” (Led Zeppelin)

“Somewhere over the rainbow/Wonderful world” (israel kamakawiwo’ole) vs. “Against the Wind” (Bob Seger)

“When Doves Cry” (Prince) vs. “One Sweet Day” (Mariah Carey)

Stories from the vault…

“Stand By Me” (automatic entry): The winner of the 2010-2011 grand 600-song tournament that Guillermo and Janos ran together. Over a hundred people participated.

“When Doves Cry” (nominated by Joe): Guillermo and I both spent meaningful portions of our life in Minnesota. Somehow, despite being at different points in our lives, and our residencies being separated by several years, we still found the same home away from home—a small, grungy coffee shop tucked away in an unassuming corner of St. Paul. He and I had no particularly shared history tied to “When Doves Cry”, but as another proud son of Minnesota, Prince felt like the right choice to honor this shared experience.

“Paradise by Dashboard Lights” (nominated by Kate Gage): Guillermo and I had EXTENSIVE conversations about this being included in a previous tournament (I think 2011?) and while I think I ended up submitting something else for that roud, someone else nominated it and thus began internal organizing to vote this up. We also would go to this record store up by his place in Greenbelt and I can’t remember what we bought there but that might have bee where I got this as a single on vinyl (which I TREASURE mostly because it has both the short version AND the 12:$% minute version with the baseball narrative) Also one time after going to that record store Guillermo and I went to a FANCY DINNER at Red Lobster which remains the only time I’ve ever been and will ever go to Red Lobster. I refuse to go without Guillermo.

“Levee breaks” (nominated by the Catholic): Played this song on repeat driving around Biloxi and Plaquemines

“Somewhere over the rainbow/Wonderful world” (nominated by Karissa, version adjusted by Janos): G used to blast it as a wake up song for all the balcony dwellers at the Hands On warehouse.

“One Sweet Day” (nominated by Chelsea): At the risk of either end of the spectrum of cheesiness or intense emotion, Guillermos love of 90s music made this song coming on the radio a few days after I found out Guillermo died cemented this song’s cathartic powers for me.

“Devil Makes Thee” (nominated by Adrock): In 2014 after numerous tournaments, Janos organized a series of weekly populated playlists – not competitive just what you were hearing. Guillermo posted this one and it’s become a permanent feature in playlists and tournaments of mine ever since. It even strikes the right feel these days, so an added bonus.

Janos Marton is a lawyer, advocate and writer.
View all posts by Janos Marton →
This entry was posted in Uncategorized. Bookmark the permalink.