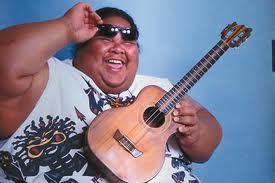 Spreading the match-ups out by an extra day to see if that encourages more participation. Listen to today’s match-ups at the bottom of this playlist, see the brackets here, and vote by commenting below before 11:59pm on Friday.  You can listen to R. Kelly (Track 17) here.

#1 All Along the Watchtower (Jimi Hendrix) vs. #8 In the Pines (Nirvana).  Recently read about a show Leadbelly did with Woody Guthrie and Pete Seeger in New York, 1940- some old school, radical times.

#4 Somewhere Over the Rainbow (Israel K.) vs. #5 The Great Pretender (Freddie Mercury).  Perhaps this showdown is coming early in the tournament, but I imagine it will be a close one! The winner takes on Jimi v. Kurt.

#2 House of the Rising Sun (Animals) vs. #7 Change Gonna Come (R. Kelly). As you can see, I’ve linked to the audio of the R. Kelly show, which is higher quality than Youtube.  Just learned that while House is an obscure old song, the man who brought it to prominence was Woody Guthrie.

#3 Respect (Aretha Franklin) vs. #6 Head On (Pixies).  Based on last round, Aretha is heavily favored here, but Head On is a great pregame song, if anyone is off to a mid-week holiday party.