We’re Back: Looking for the Best Cover Song of All-Time! 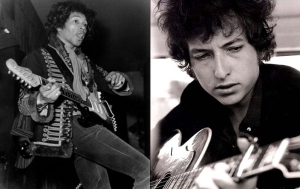 From 2010 to 2012, this site hosted some mighty entertaining single-elimination music tournaments, and now we’re bringing one back.

For the initiated, music tournaments follow a simple March Madness elegance- songs compete against each other in a bracket.  You vote for a winner, and it advances to the next round.  63 matches later, we have a winner.   We’ve got the details below the scroll.

We’ve actually done a “Best Cover Song” tournament once before, but I made the tragic error of excluding songs that were better known than the original: “if you stopped someone on the street and asked them who sang ______ and they responded with the person that did the cover, then it will probably get vetoed.”

The reasoning for this was noble and practical- we were all hoping to learn some new songs, and frontrunners like “Twist and Shout” (Beatles) and “Hallelujah” (Jeff Buckley) had just gone deep in the epic 512-song “Best Rock Song of All-Time” tournament.

Unfortunately, stripped of some of the actual best covers of all-time, the earlier rounds had a replacement-era baseball quality to them.  The eventual finals saw “With a Little Help From My Friends” (Joe Cocker) edge out “Valerie” (Amy Winehouse, RIP).   Those are both great covers, but the moment lacked gravitas.

The tournament will start Monday night.  You can submit your nomination in the comments below!   Here are a few guidelines:

1) Any cover is eligible, with cover defined as another artist having written AND released a prior version;

2) Live versions are acceptable as long as they can be found on Grooveshark, Youtube or Spotify;

3) Max two songs per performing artist, and that’s if two different people nominate them (No limit to songs originally by artist- the Dylan/Beatles corollary);

4) Songs that did really really poorly in the last cover tournament are out;

5) Hip-hop sampling probably doesn’t count as a cover, but I could be persuaded on a case by case basis.

We’ll go over tournament and scoring rules in our next post. Great to be back!

Janos Marton is a lawyer, advocate and writer.
View all posts by Janos Marton →
This entry was posted in Uncategorized and tagged Best Cover Song of Alltime. Bookmark the permalink.

15 Responses to We’re Back: Looking for the Best Cover Song of All-Time!