Some Burning Man Photos on a Rainy Day in New York

This work by Peter Hudson was probably my favorite. The installation is activated by people experiencing the art, and gives the holographic image of a man falling.

I have not yet processed my thoughts on Burning Man, though I can say with some certainty that it was the most unique, fun, introspective and meaningful 8-day stretch of my life.  Meaningful because I got engaged, but the other adjectives would have held either way.  In time I would like to post some 2,000 word reflection, but for now I’ll leave you with photos that are supposedly worth way more than that.

Burning Man has been in my dreams more than half the nights since it ended. Because I got such little sleep during Burning Man, and probably missed out on proper rem sleep entirely some of those nights, my mind is probably still getting around to processing the sensory and intellectual overload.   Enjoy a taste of my experience below, and realize that you can way better images on google if you’re interested in seeing more. 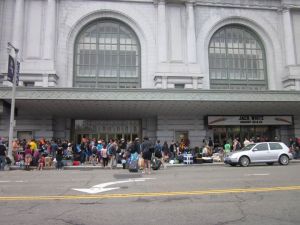 We had the fortune of seeing Jack White two nights before Burning Man. I’ll review the show during my forthcoming piece, but suffice to say it was a solid bucket list performer to have experienced, though short of transcendent.  This was also the meet up for the Burner Express bus that took us from San Fran to Black Rock City.

It took us ten hours to get there, even with the Burner Express bypassing six hours of traffic at the gate, but at least the scenery was lovely once we ran out of beer and water on the bus. We also never hit 70 mph during the last half of the trip. 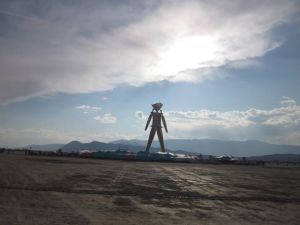 First daytime view of the Man. Notice the muddy grounds after an uncharacteristically hard rain that stranded some on the highway for 24 hours (you can’t drive through a muddy desert). 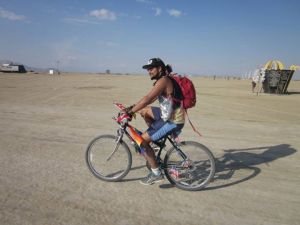 Me and my trusty bike.  BM is several miles across in each direction, so bikes are pretty necessary. Mine was decorated with flags of my favorite country as a nod to the “Caravansary.”

Our favorite sound stage, the itinerant Robot Heart.  We rocked to their spellbinding “sunrise set” the morning of our engagement.

You can actually listen to that set here: https://soundcloud.com/robot-heart/dj-three-robot-heart-burning-man-2014 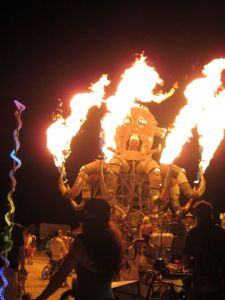 El Pulpo is one of hundreds of “art cars” that traverse the Playa, and among its most iconic. The theme is “steampunk octopus.”  I hadn’t really heard of steampunk style before Burning Man, but it’s pretty chill, look it up.

With Anna on the roof of the Misfits Treehouse.

One of our favorite art installations.  You can see the Temple in the background. Like a prettier version of Christo’s The Gates…

During multiple journeys we found solace in the Library, which housed hundreds of manuscripts filled by Burners over the course of the week, offering wisdom, deep stories, and hit or miss humor.  Most of all, it served as a place to quietly ponder, right in the middle of the madness, and without the intensity of the Temple.  Anna does a reading here. 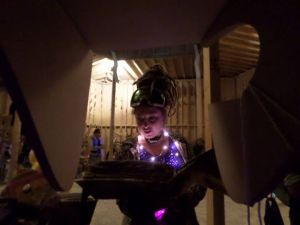 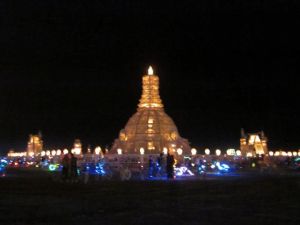 Speaking of the Temple…Many better pics of it out there on the net. For those unfamiliar, it is a place of reflection, often in memory of lost loves ones, and tributes of art and writing adorn the interior.

This gives you a sense of the interior artistry.

We found this during one of our daily sojourns. The camp provided raquets and balls, and we messed around playing doubles for a while. 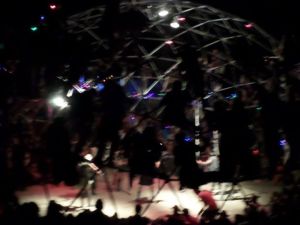 The Thunderdome.  Those dark splotches of black you see lining the dome? People climbing up the dome to get a better view of the battles, in which participants swung from harnesses with jousting sticks.

The Friday morning burn of the large Embrace art installation was among the more moving moments of the week.  The structure could hold over a hundred people, and took almost two years to make. 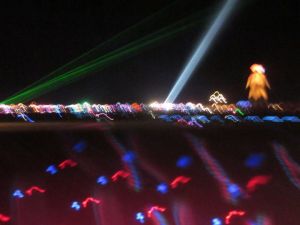 For some reason, this photo struck me as the best approximation of how I actually feel when I’m wandering the Deep Playa, more than a mile from Black Rock City, looking back and soaking it all in.

There is actually a decent amount of live music at Burning Man if you know where to find it and are in a decent of state to bike yourself across the desert for it.  Live music is something a healthy percentage of Burners crave more of- not everyone can live of electronic for a week straight.  I had made plans to catch Crossroads, a Chicago and Bay Area based funk outfit, and finally caught them on their last night, when they played more than four hours of covers, ending with “With a Little Help From My Friends.”  Then the neighboring camp made everyone grilled cheeses. 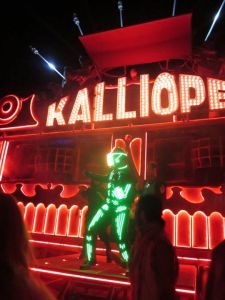 This was the set on which I later proposed, though not to this funky-dancing robot. 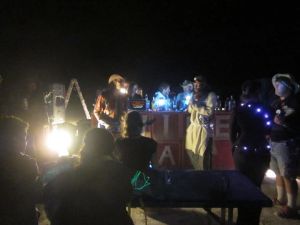 Our last night we stopped by a karaoke party, which, upon learning we were newly engaged, forced us into a duet of “Love Shack”, which is much longer and has many more verses than it seems. I sort of redeemed myself by leading the way on “Livin’ on a Prayer”, pictured here.

The installation where we took our engagement photo, about five hours after the magic moment.  You’ll notice little holes in the letters- those are shaped like birds, and a friendly driver we bumped into on our way to the bus station the final morning gave us a bunch of them when he heard our story. We’re keeping two for ourselves, but hope to hand out the rest to awesome couples over the next year.   And yes, that’s the sun behind us.  “Is that the sun?” was a comically recurrent question that comes up at the end of all-nighters in the desert.

Hope you had a good time.  If the brain keeps churning, a more profound analysis of what this crazy experience means will be posted down the road.

Janos Marton is a lawyer, advocate and writer.
View all posts by Janos Marton →
This entry was posted in Adventures and tagged Burning Man, Embrace, Thunder Dome. Bookmark the permalink.