Three main ideas emerged out of the rock by 1966, with the proactive developments of the British Invasion, the American response, the rise of folk rock, and the development of sweet soul and southern soul. The first was a juxtaposition of mainstream and subculture- the psychedelia movements of San Francisco and London grew largely out of the public eye. The second was the trend toward musical ambition and the formation of what Professor Covach terms “the hippie aesthetic.” Music starts to be seen as an artistic creation as opposed to something to be made and then disposed of. The third was the growth of the idea that the musical experience was not only enriched by a drug “trip” but could in fact be constructed as a trip itself. LSD and psychedelia are forever linked- many artists are invested in a serious-minded counterculture idea, idea is that LSD is the gateway to access to some sort of higher consciousness.

The hippie aesthetic as a concept can be mapped to five primary characteristics. The first are serious lyrics- moving toward serious lyricism as opposed to frivolous romance, which in turn leads to the idea of the “concept album.” The second is serious music and drawing in classical and jazz components to traditional rock development (can be seen as early as “There Goes My Baby” but certainly advanced by Miles Davis and John Coltrane.) The third is the concept of virtuosity, perhaps best seen with the guitar innovations of Eric Clapton and Jimi Hendrix in London in the late 60s. The fourth would be the use of technology, wherein both Phil Spector and Brian Wilson of the Beach Boys are pioneers (adding more and more tracks, the arrival of the mellotron sampling synthesizer.) Finally, the idea that a rock musician was a bona fide artist, and that artistic integrity is tied to one’s credibility. The Beatles and the Beach Boys were the first to push the boundaries leading to the solidification of this aesthetic. As previously described, Wilson’s commitment to studio sessions and a perfect sound was to a level of desired perfection not previously seen. Simultaneously, the Beatles craft the seminal concept album with Sgt. Pepper’s Lonely Hearts Club Band in June of 1967. Around this time, manager Brian Epstein dies of a drug overdose and the Beatles start traveling extensively to India to get involved with transcendental yogi processes.

The San Francisco Psychedelia scene has its roots at Haight-Asbury, acid parties in Virginia City, Nevada at the Red Dog Saloon. In the fall of ’65, The Family Dog begins organizing psychedelic group meetings at rented out song halls with extensive poster art. The official start of counterculture in San Francisco could be thought of as the January 1967 “Human Be-In,” gathering of musicians and beat poets at Golden Gate Park. As the 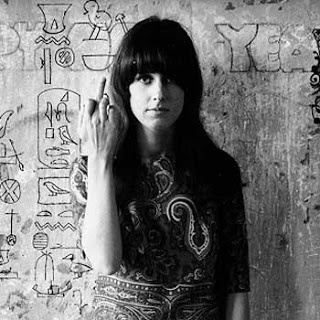 “music experience” becomes more valued, venues such as The Fillmore and the Avalon Ballroom begin investing in light-music synchronicity. The Oracle and Rolling Stone begin publishing. Important acts here: The Grateful Dead (every live performance is different, emphasis on improvisation,) The Jefferson Airplane, Janis Joplin, Country Joe and the Fish. Grace Slick of Jefferson Airplane and Janis Joplin  can be thought of as emblematic of the rise of the female artist into prominence.

In London a separate psychedelic scene was developing- largely driven by the arrival of Allen Ginsberg from the US who travels to promote beat poetry and LSD. Puts together “Poets of the World/Poets of our Time” in Royal Albert Hall in 1975. The first big British psychedelic artist in the underground scene was Pink Floyd. Other important underground acts were The Soft Machine, Tomorrow (with Steve Howe who would go on to the bands Yes and Asia,) and The Crazy World of Arthur Brown (with Carl Palmer who would go on to Emerson, Lake, & Palmer.)

Mainstream stars of the era include The Rolling Stones (specifically, Their Satanic Majesties Request in 1967 written as response to SPLHCB,) Traffic, Van Morrison, Donovan, Jimi Hendrix, and Eric Clapton. Hendrix is from Seattle, tours around with various acts, playing in Greenwich Village when the bassist from The Animals offers to work with him if he moves to London. Famous quote: “I’ll do it if you can introduce me to Eric Clapton.” Hendrix and Clapton begin years of mutual respect and friendly competition. Clapton (out of Cream) himself was a major advocate of traditional blues and blues rock. From 1966 to 1967, Jimi Hendrix Experience and Cream produce albums every 6 months as responses to the other.

Elsewhere beyond San Francisco and London, should note the rise of The Doors in Los Angeles- Jim Morrison was focused on the idea that there was a dark side to the idealism and flower power of psychedelia and sought to capture it. Arthur Lee & Love, Iron Butterfly, The Vanilla Fudge, and the Basement Tapes of Bob Dylan & The Band notable.

Beatles again. Here’s a Grooveshark playlist on the song competitors from the Psychedelia era. Working on the associated widget and getting it to work on the site (I think we did this once upon a time.) Check it out!

The day I was born, Michael Jackson's Thriller album was at the top of the Billboard 200. I've been trying my best to live up to that expectation ever since.
View all posts by g-mo →
This entry was posted in Music, Music Tournament and tagged Beach Boys, Beatles, Clapton, Grateful Dead, Hendrix, Janis Joplin, Most Influential Rock Song, Pink Floyd, Psychedelia. Bookmark the permalink.