The next Elvis was neither soul nor rockabilly…nor American. In the early 1960s, UK artists imitated American artists for the most part- an idea that American music was “better” in this period. There were a few Atlantic Ocean crossovers, but the problem was that the BBC filtered all music- did not let too much out of Britain. Within Britain, the Skiffle movement emerged, British bands adapting American folk music and adding a big band component. Trad Jazz and Blues Revivalists also there- overall though, UK music in the 60s pre-Beatles had a component of imitating lower class American culture. 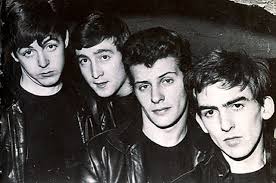 The Beatles came together in the late 50s, went to Hamburg, Germany to play shows for a bit (with Pete Best on drums.) Lot of American cover songs- Carl Perkins, Elvis Presley, The Shirelles, Chuck Berry, Buddy Holly. By 1963, had prominence and a number of hits, played on “Sunday Night at the London Palladium” in 1963 (the British version of the Ed Sullivan show.) On February 9th, 1964 appeared on “The Ed Sullivan Show” in the US, official start of the British invasion. Over the course of the early 60s, made a shift from craftsmen to artists- influenced by a meeting with Bob Dylan in the Fall of ’64 who encouraged them to put more seriousness in their lyrics. Were pioneers in the era of putting authenticity to rock (i.e., getting away from the Brill Building model.)

In 1963 there was a definitive Blues Revival occurring in Britain. A young singer named Mick Jagger watched all of this from the audience of Blues, Inc., a set of blues artists performing at the Marquee Theater on off-nights. One night Jagger fills in for a missing singer- rest is history. The Stones are always, always about the blues in early years. Start out at the Crawdaddy Club, Dick Rowe takes managing away from Giorgio Gomelski (club owner.) Start out with covers before the Jagger/Richards team begins writing. Important to note that through the 60’s, the Stones had little success in the U.S. compared to the Beatles- had to play country fairs, etc. until 1969.

Something should be said for two major UK bands of this period with powerful aggressive music but also clever and thoughtful lyrics (i.e., a merge of the Beatles and Stones styles.) The first is The Kinks w/ Ray Davies- music did not have that big of an impact in the U.S. but rocked Britain (Kinks were banned from the U.S. in the 60s.) The Who similarly did not have success in the U.S. until the release of Tommy but were releasing sophisticated music in the UK all the long while.

The Beatles are not on Spotify, so we have to go Grooveshark this week- sorry for the inconvenience!

If the playlist doesn’t work below, you can see and listen to the competing songs here: http://grooveshark.com/playlist/Week+4+The+Beatles+And+The+British+Invasion+1964+1966/89095594

The day I was born, Michael Jackson's Thriller album was at the top of the Billboard 200. I've been trying my best to live up to that expectation ever since.
View all posts by g-mo →
This entry was posted in Music, Music Tournament and tagged Beatles, British Invasion, Music Tournament, Rolling Stones, The Kinks, The Mods, The Who. Bookmark the permalink.