The rise of rock and roll in the 1950’s was due to the rise of youth culture itself. This era saw the invention of the American Teenager; prior to this, America had not celebrated a period between childhood and adulthood nor recognized a market for goods and services for such a consumer. The rise of the concept of a “radio DJ” was critical for the flourishing of rock and roll as well.

Record industry charts like Cashbox and Billboard were created to advise individuals in music retail (i.e. jukebox business, record sales.) Songs began to cross-over from their silos in the Pop/Country/R&B triumverate, particularly from R&B to Pop. This was literal as well as in people covering songs (artists did not maintain rights to their songs in this period.) The first big crossover hit was Bill Haley & The Comets’ “Rock Around The Clock,” taken directly from Big Joe Turner’s “Shake, Rattle, & Roll.” Fats Domino started getting radio play with white 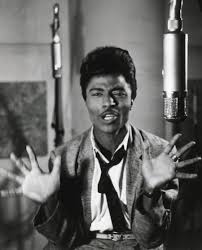 The rise of Elvis Presley was hugely important- a charismatic and talented singer with an early dedication to R&B artists. Started with Sam Phillips at Sun Records before Colonel Tom Parker brokered a deal to bring Elvis to RCA for a meager $40,000 to Sun. Not as crazy as it sounds- Sun was a small, regional label and could not press records at a rate fast enough to meet the demand.

Suddenly as quickly as it starts, “the music dies.” Elvis joins the army, Buddy Holly dies, Little Richard quits to preach, Chuck Berry is arrested for violation of the Mann Act (transporting minors across state lines,) and Jerry Lee Lewis marries his cousin. At the same time, the 1959 Payola Investigations begin in which Congress investigates the “pay-for-play” model wherein DJ’s were getting cash from indie labels for playing rock and roll records. Very suddenly the indie labels are driven out of business, and the big music magistrates retake control of the market.

We’re making the leap to Spotify- check out the songs that will be competing below! Note: please comment below if you have problems with the playlist. I want to get feedback now as opposed to when the tournament starts to make sure I’ve got the kinks worked out for a clean start.

The day I was born, Michael Jackson's Thriller album was at the top of the Billboard 200. I've been trying my best to live up to that expectation ever since.
View all posts by g-mo →
This entry was posted in Music, Music Tournament and tagged Buddy Holly, chuck berry, Elvis Presley, jerry lee lewis, Johnny Cash, Little Richard, most influential rock song ever, Music Tournament, pat boone, rockabilly. Bookmark the permalink.