The Peoples’ Choice: Man on Fire vs. Just Like Heaven 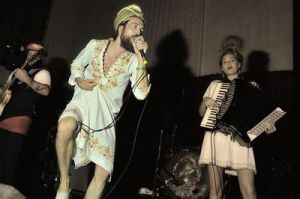 And then there were two.   I know voting in a music tournament was the last thing on folks’ minds this week, so thank you to all who were able to vote.  Hopefully everyone is doing alright and has had their power restored.

Separated by 25 years (1987 and 2012), Man on Fire and Just Like Heaven are both great songs that have won wide praise from voters throughout this tournament.    May the best song prevail, joining “Stand By Me”, “Somebody to Love (live in Montreal)”, “With a Little Help From My Friends”, and Led Zeppelin as  livingthedream.org music tournament champions.

Listen here and vote by commenting below before 8pm (EST) on Thursday.

Janos Marton is a lawyer, advocate and writer.
View all posts by Janos Marton →
This entry was posted in Music, Music Tournament and tagged Edward Sharpe & The Magnetic Zeroes, Just Like Heaven, Man On Fire, Peoples' Choice Tournament, The Cure. Bookmark the permalink.

11 Responses to The Peoples’ Choice: Man on Fire vs. Just Like Heaven