End It, Don’t Mend: The War on Drugs Stops Now 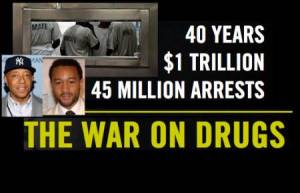 The War on Drugs should have ended a long time ago, and everyone knows this.   It rips apart communities, sends millions of non-violent teenagers through the criminal justice system, and dumps the rest of us with an enormous prison tab.

In his new film, The House I Live In, Eugene Jarecki asks why so little has changed forty years after Richard Nixon’s fateful announcement to “go on the offensive.”   The documentary weaves masterfully from the personal to the historical.   Most poignantly, Jarecki takes traditionally unsympathetic characters in this narrative- prison wardens and sheriffs, and shows that they get it too.   The only people who show no depth of understanding whatsoever are the politicians.

Where do we stand in 2012?   Fortunately, the tide in America’s savage domestic war is on the verge of breaking.

This past March, Pat Robertson called for the legalization of marijuana.  In arguing that marijuana should be treated like alcohol, Robertson conceded, “this war on drugs just hasn’t succeeded.”
A month later conservative icon George Will said enough is enough in an April column that declared the War on Drugs an expensive failure.
“We’re warehousing addicted people every day in state prisons in New Jersey, giving them no treatment,” lamented right-wing heartthrob Governor Chris Christie, making a moral and economic case for ending the War on Drugs.
On the libertarian end of the spectrum, Ron Paul has long trumpeted his opposition to the War on Drugs, and Libertarian Party candidate Governor Gary Johnson has made it practically his only issue.

While President Obama has generally followed the bipartisan approach to rigid enforcement, comments from inside the administration give reason for hope.   When I asked Eugene Jarecki what he made of then-Senator Obama’s forceful comments against the War on Drugs in 2004, in contrast to his current record, Jarecki spoke of a highly encouraging conversation he had with Obama officials during the 2008 transition.   Jarecki readily acknowledged the shortcoming of the administration in this area, and while he believes that the President’s people have their hearts in the right place, they are facing a wall of Congressional opposition.    Jarecki’s film details the enormous economic impact of the prison industrial complex on rural communities across the country.   Similar realities caused even President Bush to get rebuffed when he tried to shut down unneccesary military bases towards the end of his administration.

If reasonable people (and even unreasonable people!) can agree that the War on Drugs has failed by every metric imaginable, and needs to end yesterday, where do we go from here?  Despite Ron Paul, and despite Gary Johnson, the War on Drugs is as invisible as ever in the debate between President Obama and Mitt Romney.   This is an issue that has to be spearheaded at the local level.   Colorado and Washington are on the verge of legalizing small amounts of marijuana.   Support for Amendment 64 in Colorado stands at a staggering 51-40% in the latest poll.

As a New Yorker, I will do everything I can to make this a critical issue in 2013, when we will elect a new mayor and dozens of other local offices.   There is cause for hope; all of the major contenders have criticized “stop and frisk”, an ugly policing tactic made possible by current drug laws.  Now is the time to ask them to take the extra step.  If local governments can lead, we can ask President Obama to join us and end the War on Drugs during his second term.   As John and Yoko once said, the war is over when you want it to be.

Janos Marton is a lawyer, advocate and writer.
View all posts by Janos Marton →
This entry was posted in Political ramblings and tagged Eugene Jarecki, The House I Live In, War on Drugs. Bookmark the permalink.