It’s really hard to go from complete nobody to talk of the nation in one day, so congratulations, Todd Akin.   This chump made headlines when he responded thusly to a question about whether women who became pregnant due to sexual assault should have the option of abortion:

Well you know, people always want to try to make that as one of those things, well how do you, how do you slice this particularly tough sort of ethical question. First of all, from what I understand from doctors, that’s really rare. If it’s a legitimate rape, the female body has ways to try to shut that whole thing down. But let’s assume that maybe that didn’t work or something. I think there should be some punishment, but the punishment ought to be on the rapist and not attacking the child.

The observation is such a particular breed of backwards and stupid that even Republicans are demanding that Congressman Akin drop out of his race for Missouri Senator.  That’s right, the Republicans have already nominated this man to represent the proud state of Missouri in the United States Senate, having deemed him sufficient to represent them in the House of Representatives for 12 years.  (That Akin was born in New York City is a mark of shame on our fine city.)  I particularly enjoyed Laura Helmuth’s takedown, and you can always count on The Onion for cutting edge analysis.

There has been no intellectual justification for being a member of the Republican Party for some time now.  If the George Bush presidency didn’t do it for you, surely the near vice-presidency of Sarah Palin pushed you into friendly “independent” waters.   The party that spent the last year flirting with Michele Bachman, Rick Santorum, Herman Cain, Newt Gingrich and Donald Trump is no place for educated people who can think clearly.

Todd Akin is just the latest in a proud line of pea-brains who recite Tea Party mantras on camera and ride the tide of rabid dogs to primary victories over lamer, generic-brand Republicans.    Democrats are clearly not without their own faults, and the Obama administration has made plenty of mistakes.  Some liberals and radicals are just as loony as their right-wing counterparts, though they are rarely as violent or dangerous, and never as powerful.    The uninformed fanatics who pace the gateways to Republican power in 2012 allow hooligans like Todd Akin to pass.    To my Republican friends and colleagues, you are permitted to indulge your Ronald Reagan fantasies without having to pretend that this is alright.  Go get your party back in 2016.

Man, after all that intensity, we should cool down.    How about an obligatory cat photo? 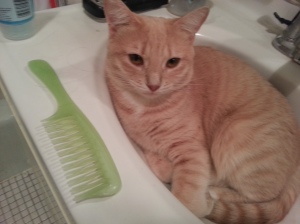 Just another day at the sink for Lulu.

This is our not a kitten, not yet a cat, Lulu, hanging out in the sink.

She came from a shelter on East 2nd street, and loves hanging out.   She’s particularly fond of bubbles, beads and lounging on the cable box.

Thank you all for your nominations for the 2nd Annual Peoples’ Choice Tournament.  So far we have 69 entries, which you can view here.   We’d like to get to 128.   Even if you’ve never participated in one of our tournaments before, you can nominate up to two songs using this form.  People keep asking me for the deadline.  Let’s just say it’s soon.

Janos Marton is a lawyer, advocate and writer.
View all posts by Janos Marton →
This entry was posted in Daily Nos and tagged Lulu the cat, Peoples' Choice Tournament, Todd Akin. Bookmark the permalink.

1 Response to Daily Nos: Todd Akin, the latest loser in the Republican parade