Big Ideas and Open Marriage: A Quest for Truth in the Heart of Gingrich Country 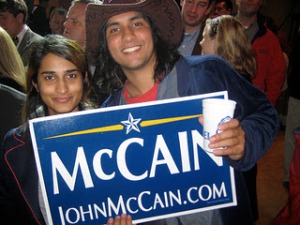 Who's that young fellow?

(We had to re-post this above after having all kinds of problems linking to it.  We blame President Obama, of course)

Four years ago, a small crew of us traveled to Charleston, South Carolina, helping then-inspirational candidate Senator Barack Obama in his pitched primary battle against Senator Hillary Clinton.   After a long day of canvassing we retreated to our hotel and flipped on the TV.   The Republicans in South Carolina hold their presidential primary a week before the Democrats, and had voted that day.  As the numbers came in, it appeared that Senator John McCain was headed for a narrow win over already ex-Governor Mitt Romney.   I called the “McCain for South Carolina” headquarters.  Their victory party was at a hotel in downtown Charleston.  Soon we were on our way. 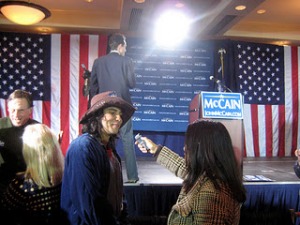 We expected some kind of security or line when we got there, but Johnny Mac had few die-hards in his camp.  We waltzed right into the half-empty ballroom, where we drank whiskey and chatted up our “fellow” young Republicans.   We were in the third row for his victory speech, and afterwards, were interviewed by the Canadian National Broadcasting Network.  When asked “why young people were supporting John McCain”, my friend Pat, putting his improv training to good use, jumped in with, “John McCain embodies youth! He embodies vigor, and the future.  What other candidate could young people possibly rally behind?”

Like many of you, I’ve been following the intellectual midgetry that is the 2012 Republican presidential primary with great amusement.   With my old friend Sally living in Charleston, the stars were aligned for a South Carolina victory party reprise.   Unfortunately, attempts to ingratiate myself with the eventual victor proved elusive, as the fickle Republican base soured on one candidate after another.  The friendly emails between “Jack Martin” and Herman Cain staffers were for naught.  Ditto for the “Sarah Martin”, who could be reached at the dutiful mrsjackmartin@gmail.com.  The night before the primary, Sally and I decided that win or lose, Newt was going to have the most raucous party.   He was the Saturday night destination. 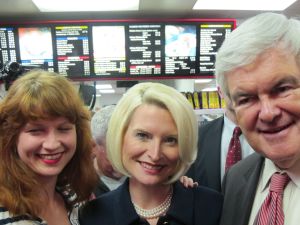 After a relaxed drive into the South Carolina heartland, we came to Newt’s last campaign stop of the day, a burger joint shaped like a burger.  We were too late for the previous event, which had been a few towns over at a Chick-fil-A.    Having worked in two Democratic presidential primaries, I can’t recall a single Democrat holding a prime-time campaign event in a fast food restaurant.   I also can’t recall a presidential campaign event ever starting on time, but as we stepped into the burger joint 20 minutes late, Gingrich had just concluded his remarks.   The people around us looked disappointed.  “He basically just said how he was going to win tonight,” explained the woman next to me.  “I thought he’d at least take a few questions,” remarked her husband. 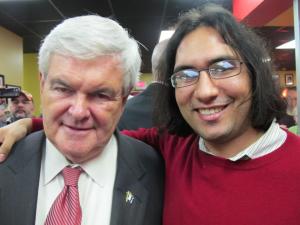 Meanwhile, Newtmentum himself was slowly plowing his way through the crowd.  Sally and I got ourselves into position to grab a picture with the candidate.   When our turn came, I rambled about how much I loved his “big ideas”, to which he sleepily grunted.  As I lined up to take Sally’s photo with Callista, Callista noted that she also had a Canon G-10.  They exchanged pleasantries about what a good camera it was, Sally choosing not to reveal that she had a G-11.  No need to one-up Callista in fanciness. 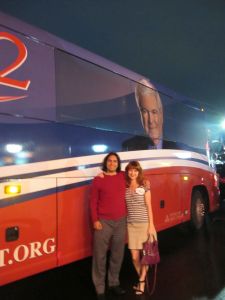 After taking a few pics outside with the Newtmobile, we chatted up his state director, Adam Waldeck, who seemed relieved to speak with people his own age instead of the old crazies that make up so much of Newt’s base.   He told us the victory party would be packed.  “I’d get there by 8pm,” he said earnestly, noting that the campaign had already approved 260 press credentials.

On the way to Columbia we ran into Suby-like car troubles, however, unable to open the gas tank as we sputtered on empty around the downtown looking for parking.   With no time left to pre-game, I poured two styrofoam cups worth for Sweet Tea Firefly Vodka, a South Carolina specialty, and one of the few liquors that can be handled enjoyably without ice or mixers.  Then it was time to enter the lion’s den.

The Hilton Hotel gave me the same buzz you might get out of trying speaking a foreign language in a strange land.   I’ve watched enough Republican debates to speak conservative with some fluency.  As expected, my cowboy hat quickly attracted a camera, and soon enough I was talking to NBC about my theme for the night, the power of Newt’s “big ideas,” like sending private companies to mine for rare minerals on nearby asteroid belts.

“Sarah” immediately drew gasps when she followed me by declaring in no uncertain terms that her support for Newt Gingrich was based on his defense of open marriage.   The NBC reporter pressed her on her “unusual” position while I signaled for her to tone it down a notch and a Gingrich staffer glared at us angrily.   Sally eventually changed course slightly, suggesting that nothing was more important than the preservation of marriage, and sometimes open marriage was the only way to save the marriage.   After the interview the staffer demanded to know whether she was a real Gingrich supporter.  As we walked a way I muttered, “Don’t lead with the open marriage…” 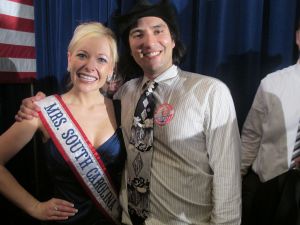 The ballroom was where all the action went down, including Newt’s victory speech, which I spent most of chanting “Newt! Newt!” after failing to convince the retired military personnel around me to chant “big ideas.”

We next tracked down Wells Tower, who became something of an anchor for us as the Long Island Iced Teas supplementing our already 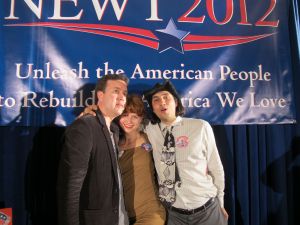 With the great Wells Tower.

potent Firefly buzz.  Wells was there doing actual reporting, and I’d like to think we perked his spirits up during what seemed like a most unpleasant assignment.

The interviews fell into our laps as we stumbled around the room.  Here is an excerpt from the Seattle Times:

With “Don’t Stop Believing” blaring, Sarah and Jack Martin sung and swayed with the crowd, awaiting Newt’s appearance. They love Gingrich’s experience.  He’s been around since I was in grade school, Sarah quipped. Suddenly, Jack took on a mock-serious expression.

“My biggest grievance against Newt,” he paused and broke into a smile, “is that he didn’t run in 2008. Then we wouldn’t have this situation.”

Is there anyone who can cogently argue against making Don’t Stop Believing the national anthem?  I didn’t think so. 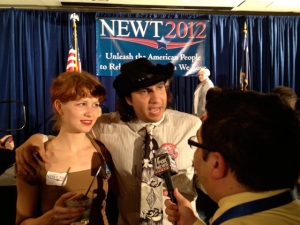 Putting my irrationally angry face on for Fox News.

GQ revisited Sally’s favorite topic, open marriage, in an incredulous article about Newt’s swinging hipster supporters.  Marin, the author, found out about our prank a day after publishing her piece, and was very cool about it.  After all, she compared me to Johnny Depp on a night when I was going out of my way to look Republican (My style has long been validated by the Pirates of the Carribean franchise. This is a tale of Captain Jack Sparrow.)

In Marin’s follow-up, the alliteratively titled, “Newt Swingers Neither Pro-Newt Nor Swingers“,  Sally explained, “My theme was open marriage, which got me a lot of free drinks because a young Republican in a tight dress who goes around babbling about her open marriage gets a lot of drinks.” 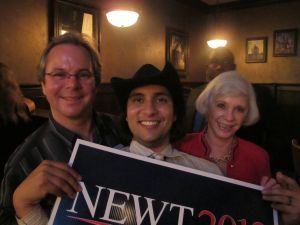 Two supporters of my "big ideas" lectures at the after-party.

Indeed, after holding court at the after-party on the topic of big ideas, I rescued Sally from a very intrigued looking businessman.   We tracked down Wells and headed for the after-after party, which was really just the night running on fumes.   From there we crashed at a friend’s apartment, leaving us with an old school walk of shame across the University of South Carolina campus on Sunday morning.

Despite the elaborate back-story Sally and I had concocted, fitting in at Newt’s party was actually pretty easy.  Like Newt supporters, we loathe Mitt Romney.  I mean, no one can stand the guy.  We’re also disappointed in President Obama and the direction this country is headed, though we’d part ways on the specifics.   And what I like most about Newt is that we really do need big ideas to get this country going.  The political discourse today is stale and dishonest, with all politicians talking up an America that no longer exists, if it ever did.

The truth is, our country will continue to be in a mess for years to come, regardless of whether or not President Obama wins re-election.  But we can start building the foundation for a competitive future now.  It starts with rebuilding our educational system for the 21st century, and spending more money on schools than jails.  It requires keeping the citizenry vigilantly engaged in the face of corporate money.  It means bringing high-speed internet access into every American home, as we did with electricity during the Great Depression.  It means equal rights for gay Americans in all fifty states. It means funding for innovative agencies like NASA and slashing a military budget that is higher than the rest of the world combined.  How are those for some big ideas? 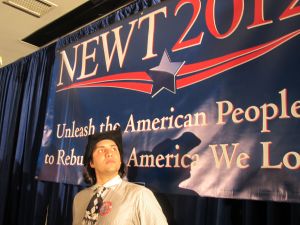