Happy 2012 everyone! Our site stats came in on December 31st- with 69,000 hits over the year. Which makes us think two things. One, thank you readers, listeners, commentators. Two, get ready for an even better year to come! We will be bringing more music tournaments of course, but we are also looking forward to a major expansion of the other sections of the site. In this vein, to kick off the year I thought it’d be nice to share the Foreword from my in-progress book about my years in Mississippi (182,000 words and counting…almost done, promise.) I’ve come to know many of the readers of this blog to varied extents, so here’s a little snippet of something near and dear to my heart. Enjoy, and let me know what you think! 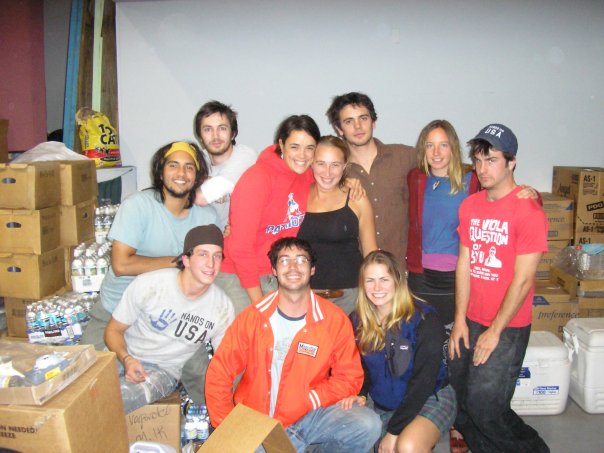 When I began my writing about my experiences on the Mississippi Gulf Coast, it was December of 2005, just before Christmas, and I had awoken in my bed at my parents’ house in Maryland in a cold sweat. I had been dreaming of a family trapped in a flood, and of trying to save them, of holding a small child above a raging current floating down Broadway as I choked in the bubbling whorls. I showered quickly, packed up my old Dell Inspiron 1500, and drove down to the Starbucks at the Milestone shopping center in Germantown to write the first version of the first chapter.

On that snowy morning I began a piece of pure emotion, a recount of the tired lull of campfire songs, of volunteers giving their hearts to the work and drinking away their secret sorrows by night. I wanted to capture the horrific magic of the hardscrabble life, tents and fires, debris and tears, love and hate of everything I saw in Biloxi after Katrina. Most of all I wanted to remember the people I knew, those that I respected, those that I didn’t, but above all to record the personalities of different individuals I had met in those months that had changed my life.

My life had not nearly begun to change. I would return to that city, time and time again, from the East, from the North, from the dark West, and eventually from over that Atlantic pond. To think back now and consider what little wisdom I might have been capable of recording eighteen months ago makes me smile. December of 2005 was far too soon to have learned anything besides responding to an inkling of an idea that my experience in the South had been important. Had been worthy of record, and needed to be recorded. And I suppose that when attempting a memoir at the age of twenty-two (although now I am twenty-four) it can be difficult to decide what is worth writing, when is the story or the experience finally book-ended, finally complete. Graham Greene once said that “a story has no beginning or end: arbitrarily one chooses that moment of experience from which to look back or from which to look ahead.” That idea holds true, but I protest against arbitrariness— I spent years waiting for an end to the story, each month thinking I had reached a newly appropriate benchmark to end my writing, even while volunteers still came, even while characters departed, even when I came and left, when I won and lost, and even when I moved out of my tent at the Hands On volunteer camp and into a home in Biloxi. And all of the sudden, as the second year anniversary approaches at the end of this summer, I have finally found it; metaphysically, I have started living beyond this city. And that was what needed to happen, I needed to start looking beyond Biloxi, not just with my eyes but also with my spirit, to take everything that has happened and step forward with confidence in myself and outside myself. Because at heart, this hurricane, this disaster; that’s just the weather. The smaller disasters, day by day, eye by eye, house by house, soul to soul, revealed in the wake of this storm, were the most empathic; gaping holes waiting to be filled. Economies of scale built on sticks in the middle of a bull ring. And there were the collisions of idealism and the red tape that wound itself back right over time, the energy of altruism and the sloth of decision formation. Things happen in this world that really make you breathe and wonder why, how, should, would. And as that happens, a larger mission of necessity reminds me that the past is constantly yet simply informing the present. It took me many lessons and struggles to come to terms with the meat of this facet of living. And I mean that not just for this coast, or American disaster response, or federal accountability, or world affairs— yes to all of those larger syntheses. But most importantly, for the people that breathe in those topics. Our pasts inform our presents. Whoever you are, whoever I am, every breathing individual has a history of his or her life. And if we expect the fruition of our lofty ideals out of the larger systems of humanitarianism, we must start with ourselves.

I arrived in Mississippi as a volunteer on a Greyhound Bus from D.C. on October 10, 2005. In my time on the coast, I gutted houses, mucked houses, demolded houses, tarped roofs, shingled roofs, handed out water, managed a grant, wrote a grant, conducted the largest in-field mold experiment in history, collaborated with the housing authority, confused President Bush with talk of allergens and mycotoxins, bored Usher Raymond with talk of upper respiratory illness prevention, dug ditches, built a park, ran heavy machinery, fell in love, become a safety consultant for a federal service organization, publicized borate treatment, invented a large-scale music tournament, served as ombudsman for my organization, adopted a hurricane puppy, planted vegetables, chopped wood, drank wine in a deserted golf course, and put together bicycles, among other things. In my time there, I experienced beautiful meritocracy, a system where skill and leadership propelled those with initiative up and beyond, peers that facilitated confidence in our young generation of earnest altruists trying to do whatever it took to get it done. I saw model after model for relief come and go, I saw desperate uncertainty in the future from the ground up, the gamut of plusses and minuses, of saviors and scammers and the in-between amalgam of help for communities that wanted it. In that same vein, as things dragged into the later months of recovery, when it wasn’t as easy as taking a Fatmax crowbar to a crumbling moist wall, I saw hesitance and impotence and energy without outlet. I saw community outcry, I saw people’s lives set aside in lieu of the Beau Rivage, thick urban monument to revitalizing the economy in the wreckage of po-boy neighborhoods and muddled publicity stunts.

It was a lot to see and having seen it through now, I hope that my presumed storytelling skill will be sufficient to relate the intensity and fact of this tale. My time here on this Gulf Coast has directed me forward, but simultaneously forced me to reflect on my own singular existence in Katrina recovery. In a way, Katrina has become me, or a part of me; it was Katrina that drew me away from the comfort and ease of talking without doing, of framing the tawdry in a gilded rectangle. It’s very easy to make a protagonist of oneself, glorify or vilify depending on your position on any given facet of silly life, and these sorts of distinctions detract from a more objective sense of one’s own history.

There was a day in April of 2006 that tree-climbing Russell Freeman decided it was time to move on. I gave him a piece of paper with the best thing I figured I’d ever thought of inscribed on it.

There were times when I thought I was a good person and times when I thought I was a horrible person. Such Manichean divisions, however, are ridiculous. I’m no philosopher, but absolutes are as meaningful as geometry. Both are baselines for making human sense of the world, and at heart neither is any more than an idea from which we construct ourselves. All we have are better moments and worse moments, and maybe a fleeting hope afterward that at the end someone we’ve left behind in any stage of our lives will remember more of the former and forget most of the latter.

No absolutes allowed. The world is round, not flat. So is everything, relief, recovery, leadership, teamwork, tragedy, triumph, brotherhood, love, love, love.

My name is Guillermo Christopher Olivos. I am 24 years old, but I don’t know how old I’ll be when you finally read this. These are my hurricane camp stories.

The day I was born, Michael Jackson's Thriller album was at the top of the Billboard 200. I've been trying my best to live up to that expectation ever since.
View all posts by g-mo →
This entry was posted in Adventures, Volunteering and tagged Hands On, Hurricane Camp Stories, Katrina. Bookmark the permalink.