How to hold your own World Cup Music Tournament 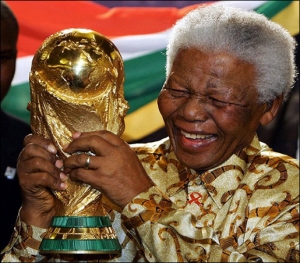 With LTD taking a break from large-scale music tournaments this winter, now is the perfect time to host your own personal tournament, and there’s no better personal music tournament format than the World Cup.
Just as in soccer, 32 songs are evenly distributed across eight divisions, and , every song plays the other song in its division.   You can score however you’d like, but to make it more soccer-like I assign one “goal” for every point above a 6, such that a song that would normally score a “9” would get 3 “goals”.
The top two advance per division, one as the high seed, one as the low seed.  Then the last sixteen songs are single elimination until the end. This reduces the possibility of flukes .    For my December tournament, half the bracket will be former personal tournament champions, and the other half will be my favorite songs of 2011.  In the last 12 months I’ve been taken by a number of late 70s/early 80s acts that I hadn’t properly explored before, and that era is strongly represented in the bottom divisions.
December  2011 Legends and Heroes Personal Tourney
Legends of the Past
Division A: Thunder Road (Bruce Springsteen); Young Americans (David Bowie), Wild Wild Life (Talking Heads); Miles Davis and the Cool (Gaslight Anthem)

Heroes of the Present

Division A: Somebody to Love (Live in Montreal) (Queen); So Lonely (Police); Raspberry Beret (Prince); Tide is High (Blondie)

Enjoy your own personal tournament, and report back to the community!