1) It has come to my attention that there actually wasn’t a final bracket created. So this is it. Link also in Brackets section.

2) Maybe I tracked the Wall of 10’s this long not because anyone ever looks at it (no one does, we can see the counts) but so I could eventually copy and paste the body of it into a TagCloud Wordle. I’m embarrassed by how big my name is. It’s not exactly “who gave the most 10s” as much as “who gave the most 10s where at least one other person gave it a 10.” I think that’s why Jacob’s name is so small. Kidding. Here’s a link to a bigger version. 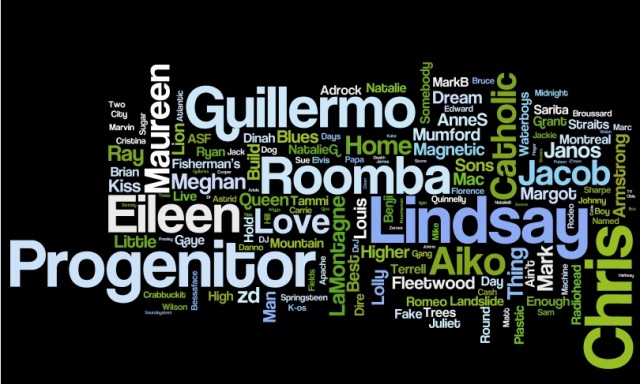 PS- Fun With Numbers forthcoming. Be prepared to be called out graphically.

5 Responses to Final Bracket and Wall of 10’s Wordle