Quarter-Finals Results: Left Side of the Bracket

Coming into the quarter-finals, we’d already eliminated 272 artists since the Round of 512 began in early December.  The one artist that simply would not go down is Queen, who send two of their songs to a dramatic all-Queen Final Four match-up. 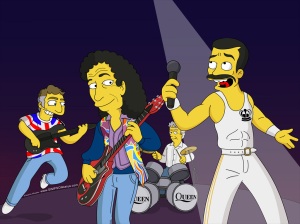 In case anyone is wondering about our voting base’s sample size, I drilled this question at party-goers last night, and found the results their pretty much identical to our results here.  A lot of people were torn up about a match-up between two true legends of rock and roll.  Most people preferred Bohemian Rhapsody by a hair, but many, including its supporters, acknowledged its cheesiness as well as its greatness.   This was a close one early on, but as Easter moved along, Rhapsody put increasing distance between its rival.  While scores suggest that Baba might have beaten Under Pressure, that’s now how the tournament works.

Bohemian Rhapsody makes the Wall of 10s courtesy of Sam, Pill, Dr.J, Danno and Adrock, and has to be considered the heavy favorite in the upcoming semi-final.

Thank you to all of our first-time voters, I hope you enjoyed the experience.  With one Queen song guaranteed a finals spot, we’ll be watching closely tomorrow who is percolating over in the right side of the bracket.