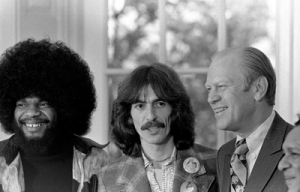 The rounds keep flying by.  Here we are, closing out the Round of 32.   The Sweet Sixteen awaits, a weekend away.  Without further ado, here are the songs of M, N, O and P (except for Let It Be and Golden Slumbers Medley).  Vote by commenting below or emailing LTDdotorg@gmail.com by 8pm Sunday. I’ve been too busy at work to do a path to the Round of 32 for the songs below, but we’ll make sure to provide that info before the Sweet Sixteen.  And yes, this is a picture of President Gerald Ford with George Harrison and Billy Preston, the Fifth Beatle during the Let It Be sessions.

Division M Championship: #1 Under Pressure (Queen/Bowie) vs. #2 Let It Be (Beatles)– The only two artists left with a shot at multiple songs in the Sweet 16.

Division N Championship: #6 Golden Slumbers Medley (Beatles) vs. #11 Zombie (Cranberries)– Zombie has taken out many a guitar hero- Lennon and McCartney switch up the tempo.

Division P Championship: #1 Piano Man (Billy Joel) vs. #3 I Will Survive (Gloria Gaynor)– Super weird, listen to the first three seconds of each song- pretty much the same.  That’s where the similarities end.

Janos Marton is a lawyer, advocate and writer.
View all posts by Janos Marton →
This entry was posted in Music Tournament and tagged Round of 32. Bookmark the permalink.

22 Responses to Music Tournament Round of 32: Division M, N, O and P Championships