Eleven years ago, Sippy Gulati was awarded academic credit for a dental internship.   Around the high school it was considered an enormous coup, as Sip had spent the entirety of the internship tutoring his dentist on his basketball game.  That’s why some of us were skeptical when Sippy enrolled in dental school after college.  Yet here we are, seven years later, and Sippy is opening his own dental practice in Queens.  We are all proud of him, particularly for having the gumption to make an entrepreneurial move during such rough economic times.   That’s why I’m here touting Forest Hills Family Dental.

Now, I know that many of you don’t have dental insurance.  A lot of jobs these days don’t include it, even good ones.    Because he is looking to open up his clinic with a bang, Sip’s offering really good prices on things like cleanings, cavities, and all the basic stuff.  If you’re reading this and haven’t been to the dentist in like three years, you should probably make an appointment. 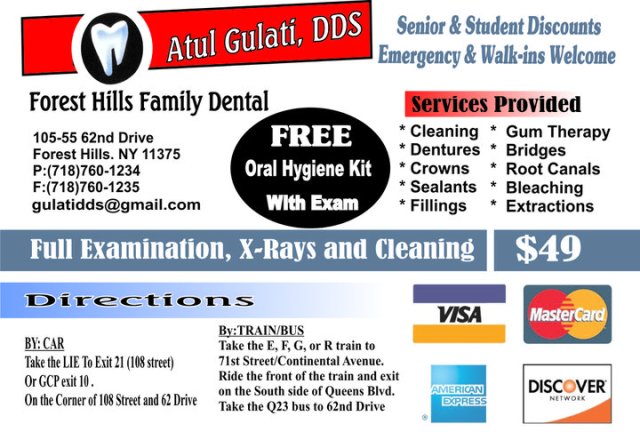 If you think a plug for a private business doesn’t qualify as living the dream, think again. I’ve known Sip since we were precocious karate students in sixth grade.   A young person opening his first business is part and parcel of the American dream, and I hope it’s a big success.   Plus, like I said, many of you are probably overdue for a trip to the dentist.  I’ll be scheduling myself for some time later this month.

Janos Marton is a lawyer, advocate and writer.
View all posts by Janos Marton →
This entry was posted in NYC and tagged Dentist, Forest Hilly Family Dental. Bookmark the permalink.