In the 1840s, expansionist American rhetoric was soaring, and as tension grew over the annexation of the northwest territories, Democratic politicians road the slogan “54-40” or fight to electoral success in 1844.  The slogan referred to the 54th parallel, far north of the present day Canadian border.  The British, in contrast, had hawks claiming that they had rights to western land as low as the 42nd parallel, today’s California-Oregon border.  President Polk, sensing an upcoming war with Mexico, was not in the mood to fight on two fronts, and eventually compromised with Britain on the 49th parallel, placing present day Oregon and Washington under U.S control, and present day British Columbia under the Crown.

Following our night of weirdness in Spokane, Senge and I took a five hour bus ride into Seattle.  The terrain for most of the ride was pure farmland, reminding us more of eastern North Dakota than anything else we’d seen out west.  It was not until the bus began its slow climb into the mountains near Seattle that the scenery turned to the woodlands you expect out of Washington.  The ride was otherwise dreary, an unpleasant reminder of how Greyhound manages peoples’ time and maintains its bathrooms.

The neighborhood was full of bars, music venues, vintage clothing stores and the like.  Senge explored the best we could, but eventually caved to exhaustion after visiting some key grunge era landmarks, like Cha Cha’s.

The next day Senge departed from the Great American Road Trip, and I was off to Vancouver, a short, cheap bus ride away.

In Vancouver I stayed with Sarah Berman, in my first ever case of Couchsurfing reciprocation.  Couchsurfing is usually a karma based system- the more people you host, the more people are likely to host you.  Sarah had surfed with me in Brooklyn last year, and I assumed that one day I’d make the trek to Vancouver.  Freed from the punishing schedule I’d designed for me and Suby, visiting a cool city a few hours to the north made sense.  It was a Monday night, but Sarah rallied her friends, and before I knew it we were having a mini roof party in the late hours of the evening.  I asked a dude what roof we were on, and he told me it was the local movie theater. How cool is that?  Between the evening’s festivities and the great Asian food that is everywhere you turn, a night in Vancouver fit the bill.

Lucky for me and Sarah, it was Tuesday morning.   We went to a Dutch themed restaurant from brunch that has a Pannekoek special every Tuesday.  A Pannekoek is like a pancake that takes up your whole plate, with ingredients baked into it and placed on top of it.  They are pretty filling and delicious.

Strapped for time, but hoping for a final adventure, we went to a tree where Sarah takes her guests to get a unique view of downtown.  It is a tall tree, with branches perfect for climbing.  I do not love heights, but this tree was pretty friendly, and the view of the downtown was great.   The architecture in all these northwestern cities is pretty underwhelming, but they make up for it with their mountainous backdrops.

The ride back to Seattle was more stressful than the ride there, largely due to the surely American border patrol, who kept us waiting in line forever while a half dozen of them mozied about.  As one of the few Americans on the bus ride, I was pretty embarrassed. On the way into Canada, a pair of Canadian officials had gotten our whole bus through the security checkpoint in about ten minutes, including their search of the bus, and acted with the utmost professionalism.   I was pretty beat when I got back to Seattle, more so when I got my daily exercise by hiking the two-mile hill to Rafter’s house. 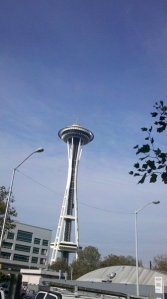 I passed the Space Needle, which wasn’t that impressive, perhaps because of the unattractive neighborhood it emerges from.  Rafter is in the throes of that dreaded 1L year of law school, so he was more than content to stay in.  I needed the rest- my first night of relaxing in two weeks.  As I prepared for bed I actually circled the room multiple times, certain that I had forgotten something.  It seemed unnatural not to be in a frantic rush. 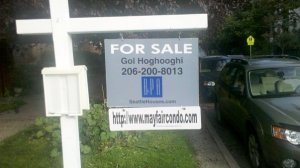 I enjoyed Seattle, and while I don’t see myself moving out there, should you choose to, I recommend the best-named realtor in town, Gol Hoghooghi.

And just like that, on to Portland, solo, sans car.  I’ll leave you with a final, epic photo from Vancouver:

Janos Marton is a lawyer, advocate and writer.
View all posts by Janos Marton →
This entry was posted in Great American Road Trip. Bookmark the permalink.