The Nutcracker and the New York Times 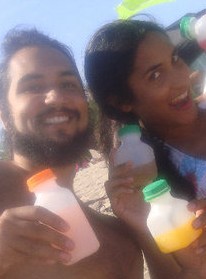 A couple days ago, the New York Times sternly took on the “nutcacker” boom in Harlem.  The article laughably drew comparisons to the prohibition era and the crack epidemic of the 80s.   Let’s get real on nutcrackers.

I had no idea what a nutcracker was until this past July, when I was minding my own business on the beaches of Coney Island.  Every now and then I’d hear some dude walk by, backpack slung over his shoulder, murmuring, “nutcrackers, $5, get your nutcrackers.”  Turns out one of our friends in the Bronx Public Defenders office routinely deals with clients who have been busted for hawking the stuff (the “Harlem” angle to the Times story was particularly odd).

A nutcracker, as you can tell from the gleeful picture, is an alcoholic beverage, mixed with different juices, served in small plastic containers.  What kind of alcohol?  The vendors admitted they had no idea.  Nutcracker producers seem to just fling whatever alcohol they have lying around into the batch they’re working on for the day.  Each container costs $5- that’s an industry standard.  Some containers might be a little bigger than others, some a little stronger than others, but it’s $5 or bust, no tip necessary.

Apparently, says the Times, a lot of pastors are freaking out over this situation.  I suppose these aren’t the best things for teenagers to get their hands on, since they are rather strong and unpredictable.  Teenagers generally have a poor track record of handling their alcohol, though one of the nice things about being a teenager in New York City is that the worst that happens to most kids is vomiting on a sidewalk, rather than crashing their cars into lamp posts like our suburban brethren.

What puzzles me about the article is the constant references to prohibition, analogizing nutcracker producers to the underground distillers of the 1920s, marveling at one point that a guy named Kool Aid can make $700 return off of $200-300 worth of alcohol and plastic containers.    The author is apparently unfamiliar with the thousands of bars around the city that engage in this exact mathematical wizardry.  Yes, New Yorkers, teenagers and adults alike, will apparently pay significantly more for alcohol when it is mixed for them and presented at a convenient time and location.   The author should ask the Yankees how much money they make off every $10 beer at the stadium.

As for the nutcrackers themselves, they tasted pretty good.  We ordered four to split between three of us, and were all a little tipsy by the end, which is an extremely good value.  Each one had its own flavor, and like Vitamin Water, some flavors were better than others.  The beach season looks to be pretty much over, but be on the lookout next summer at Coney Island.

I don’t begrudge any community’s desire to keep order in the neighborhood, but since teenagers of every race and class are drinking all over the country right now, it’s encouraging that Harlem is facing these problems, and not something worse like crack.  Ultimately, the only group of people that can crack down on underage drinking is parents.  In my own experience, plenty of parents were perfectly content to let their kids and other kids get wild- in fact, there was a strong correlation between wealth and allowing teenagers to drink.  Mike Bloomberg’s daughter had a fully stocked bar in her living room area at age 16 .  Maybe the New York Times should think about that before they write their blustery, sanctimonious diatribes, and let the nutcrackers keep flowing to the drinkers mature enough to handle them.